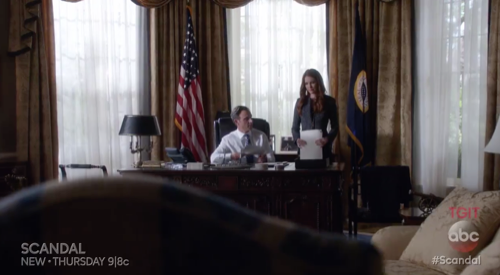 Tonight on ABC Scandal starring Kerry Washington continues with another exciting episode in an all new Thursday, February 9, season 6 episode 3 called, “Fates Worse Than Death,” and we have the Scandal recap for you below. On tonight’s Scandal season 6 episode 3 as per the ABC synopsis, “Cyrus’ ( Jeff Perry) fate is sealed in the middle of crisis affecting the entire nation. Meanwhile, Olivia (Kerry Washington) and her team are fiercely determined to uncover the truth.”

76 Days until the Presidential Inauguration….

Abby calls Cyrus at home. She tells him to shut the blinds and not to answer the door. Abby walks into a press conference where the FBI shares that they have reopened the murder case. Cyrus opens his front door to dozens of reporters.

Charlie, Quinn and Jake are together, putting together a timeline. They need to figure out what Cyrus and Frankie where fighting about. The 3 talk about one important date – a debate Cyrus had.

Meanwhile, Cyrus is stressing out. Olivia is setting him up. He swears he didn’t do it. He needs to make some calls and figure this out. There is a noise outside. It’s Liz. She wants to help Cyrus. He doesn’t believe her. She knows he is screwed. He needs someone in his corner. In turn, she wants to be chief of staff.

Cyrus remembers his past – Olivia tells him he has changed. He is surprised. She tells him that putting himself on Frankie’s ticket wasn’t the worst. He’s angry. He did his best. He doesn’t care what she thinks. He tells her to never say anything like that out loud ever again. Olivia knows he did something to get on there – she is going to dig to find out. He better watch himself.

Grant and Abby arguing about him re-opening the investigation. Abby is mad – the DOW is dropping, there is chaos everywhere. She thinks he is being played.

The team revisits videos of Frankie where he tapes a segment for students. The gang thinks Frankie was sleeping with his assistant. Olivia wants to know more.

Back at home, Cyrus is on a tirade. The phone rings. It’s Tom. Cyrus tells him he shouldn’t be calling. Tom won’t stay in his hole. Cy has used him and hurt him. He has a tightness in his chest. What makes him feel better is that he has the knowledge to blow up Cy’s world. Cy promises to make it right.

Huck finds one of Jennie’s friends in a parking garage. He wants to talk. She goes ballistic and tries to mace him. They end up talking in her car.

Back in time, Cyrus meets with Tom at a diner. Tom feels like he was abandoned since Cy was put on the ticket. Cy talks about Jennifer Fields. She is a threat. Tom suggests taking care of the girl – backing her away from the campaign. Tom wants her name while Cyrus hesitates.

Present day, Cy tells Michael he is in trouble. He tells him about Tom. Michael is angry. He believed Cy, believed that they were over. Cy begs him. He knows he hurt Michael but he needs help. He made a mistake. A horrible mistake. He tells Michael that he…Michael doesn’t want to know.

Back in time, Tom pays Cy a visit to tell him that Jennifer will no longer be a problem. Cy tells him they make a great team. Tom kisses him as they celebrate with drinks. Tom tells him that he belongs at the top of the ticket. He wants to help Cy take what is his. Do you want it? Tom asks. Cy doesn’t know what he means, but realizes what he means seconds later. Tom asks him if he wants to be president of the US? Cy hesitates and then tells him he does. He kiss passionately.

Present day, the team have their eyes on Tom. Liv wants them to begin tracking him.

Back in time, Cy visits Frankie and sees Jennifer. Her face was beaten and bruised. Frankie tells Jennifer to leave for a moment. Frankie is mad. Cy tells him that Jenn was a threat. Cy disgusts him. They are done. Cy tries to explain. Frankie tells him once he is elected, Cy will go to jail. Cy visits Tom. Cy wants to know why he did what he did – beating her. Cy tells Tom not to touch Frankie. Not a hair on his head. Tom gets it (wink wink). Cy yells – he isn’t speaking in code – he means it. He doesn’t want Tom’s help/ Tom is dead to him. They are over. Cy walks away.

Present day, Michael comes home to Cy. He brings him a gun and tells him to be careful. Night falls, Cy waits at a picnic table for Tom. Tom arrives. Cy tells him he wants to make up for treating him badly. He tells him to sit. Cy begins to apologize. Tom asks him what he wants. Cy wants him to be quiet moving forward. Cy was in love with him and he still loves him no matter how angry Tom is. Tom laughs. He isn’t a dog – he isn’t Cy’s bitch.

Tom pulls his gun faster than Cy can. Cy pleads for him to put down the gun. Tom keeps it pointed on him. Cy tells him he never really loved him. Tom puts the gun in Cy’s mouth. But pulls it out. Tom promises that there are much worse fates than death. He hits him with the gun.

The next day, Cy is home and bruised up. Michael offers him breakfast. Cy declines. He is feeling sorry for himself. Michael isn’t going to leave him. Cy talks about what he planned to do as president in his first 100 days in office. He had hopes and dreams. Michael listens intently. Cy wanted kids everywhere to see him as a hero.

Liz pays Grant a visit. Cy wants to take the offer for clemency. Meanwhile, Tom confesses to the murder of Frankie, something he did by way of direct orders from Cyrus.

Mellie is in! Olivia tells her what happened to Cy and Tom’s confession. Cy is arrested on his front door step as Michael and the baby are upstairs.

Back in time, we see Frankie talk Cy into becoming the VP candidate. Cy doesn’t think he would make a good VP, but Frankie is sure that isn’t true. Moments later, Cy cries tears of joy at his desk.