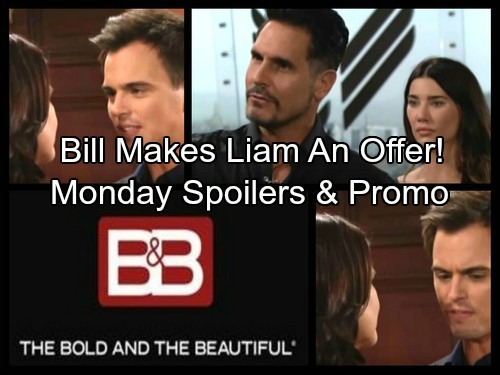 The Bold and the Beautiful (B&B) spoilers for Monday, October 23, tease that Bill (Don Diamont) will throw his defeated son a bone. He just took back his chair after deleting all copies of the recording, but Liam (Scott Clifton) was surprisingly receptive to peace. It appears that without evidence against his father, it just isn’t worth it to remain estranged.

Bill will urge Liam to stay at Spencer and become his right hand. He’ll think they could make a great team and Steffy (Jacqueline MacInnes Wood) will agree. After an enticing pitch, Liam will likely get on board. There’s a good chance Bill will allow some of Liam’s ideas now that things have changed between them. Liam might as well get any advantage he can out of this.

Steffy will be relieved by the forgiveness and cooperation she’s seeing. She worked hard to bring Bill and Liam together, but there’s no guarantee they can keep the peace. The Bold and the Beautiful spoilers hint that Wyatt (Darin Brooks) will still have major concerns. He’ll share his fears with Katie (Heather Tom) in Monday’s B&B episode.

Wyatt will wonder if this conflict isn’t truly behind Liam and Bill. He’ll ask what will happen if family doesn’t win out in the end. Wyatt won’t even want to think about what’s ahead if they can’t move past this. Unfortunately, more drama is indeed coming up. Spouse problems could be the next on The Bold and the Beautiful.

Brooke (Katherine Kelly Lang) will soon have doubts about divorcing Bill. He would love another shot at happiness with her, but what about Steffy? It’s obvious that something’s brewing between them. This situation could get ugly if Bill and Steffy can’t resist temptation. Bill could wreck his renewed bond with Liam and blow his final opportunity with Brooke.

Of course, it’s possible that Bill is playing Liam right now. He seems to genuinely want Liam in his life again, but we all know how tricky “Dollar Bill” can be. Bill’s revenge could still move forward. Whether it’s intentional or inadvertent, Liam will face some tough blows down the road.

Naturally, Sally (Courtney Hope) will play a role in all of this. As Sally pulls Liam closer, Steffy will drift further away. The Bold and the Beautiful spoilers suggest that Bill and Steffy’s connection could be quite dangerous! We’ll give you updates as other B&B news comes in. Stay tuned to the CBS soap and don’t forget to check CDL often for the latest Bold and the Beautiful spoilers, updates and news.