BY Heather Hughes on December 14, 2017 | Comments: one comment
Related : Soap Opera, Spoiler, Television, The Bold and the Beautiful 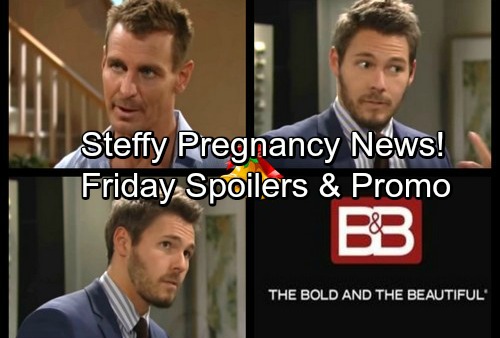 The Bold and the Beautiful (B&B) spoilers for Friday, December 15, tease that Liam (Scott Clifton) will tell Bill (Don Diamont) how much he appreciates him. He’ll point out that they’ve come a long way and that’s something he’s incredibly grateful for. Liam will leave Bill (Don Diamont) feeling guiltier than ever when he talks about how supportive his dad is. He’ll suggest that he doesn’t take that for granted.

Meanwhile, Steffy (Jacqueline MacInnes Wood) will get some huge news from her doctor. She’ll learn that she’s pregnant, so the guessing game will begin. Is the father Liam or Bill? Steffy won’t have a clue yet, but she’ll have to find out eventually. Liam will join Steffy at the doctor’s office a little later. He’ll be overjoyed when the doctor reiterates that a baby’s coming. 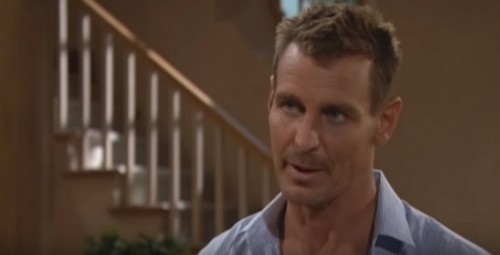 Other Bold and the Beautiful spoilers state that Quinn (Rena Sofer) will take a stand. She’ll be livid when Thorne (Ingo Rademacher) gets in her face and rants about her betrayal. Quinn will contend that she already put that issue to rest. Eric (John McCook) forgave her and it’s none of Thorne’s business.

Thorne will disagree since both Eric and Brooke (Katherine Kelly Lang) got hurt. He’ll insist that he’s always going to look out for his loved ones. Thorne is particularly interested in protecting Brooke right now. He wants her back and he’ll do whatever it takes to make it happen.

Quinn will continue to support Ridge and Brooke as the perfect pair, but Thorne will think a reunion is a terrible idea. He’ll declare that Brooke deserves better and Ridge isn’t capable of commitment. B&B fans can expect more bickering, but Thorne has no intention of backing down. Some sneaky plans are already underway.

Elsewhere, Brooke will decide to accept Ridge’s proposal. She’ll put aside any lingering reservations and just take the plunge. Next week, they’ll give their friends and family members updates on their engagement. That announcement definitely won’t go over well with Thorne!