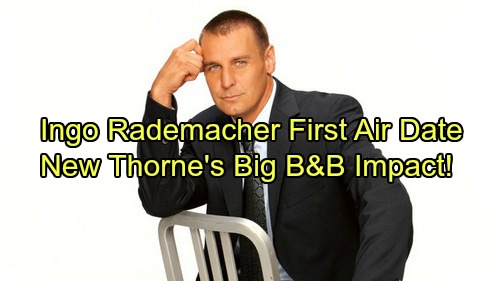 The Bold and the Beautiful spoilers reveal that Ingo Rademacher’s first airdate on the CBS soap has been announced. The actor, who is known from General Hospital, is going to have a huge impact. Find out everything there is to know about this controversial casting news.

Rademacher will be playing the new Thorne Forrester. He begins filming on October 24, but he won’t be seen on television until November 27. That is at the end of B&B November sweeps and fans are wondering what exactly will happen with this character.

When it was announced that Winsor Harmon was losing his gig, fans reacted. However, the actor went on Twitter to wish Ingo Rademacher well in his new role. He might have just been trying to keep it professional. However, if Harmon doesn’t have any bad feelings, then maybe we should give the GH alum a chance. 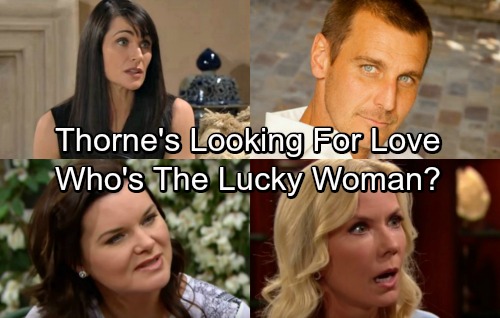 There is a lot of confusion about Ingo’s role on The Bold and the Beautiful. Spoilers previously teased that he would be playing Eric Forrester’s (John McCook) estate manager. You know, the poor soul who gets wrapped up in Sheila Carter’s (Kimberlin Brown) latest scheme. However, it was confirmed that Days of Our Lives alum Francisco San Martin actually got the job.

The latest in the Bold and the Beautiful spoilers confirm Rademacher is the new Throne Forrester. However, will fans love or hate this casting change as time goes on? Will he end up growing on us, despite our feelings about Winsor Harmon being recast? Only time will tell.

On social media, fans have expressed their unhappiness with the casting news. Even Ingo Rademacher chimed in on the debate. He didn’t take sides, but did say that he hopes B&B fans are not upset with him. Of course, viewers don’t hate the man, but they are just being very vocal about the unnecessary casting change.

Who knows, maybe the GH alum will surprise us all on B&B. Keep watching the CBS soap and check back with CDL for the latest in The Bold and the Beautiful spoilers, updates and news.