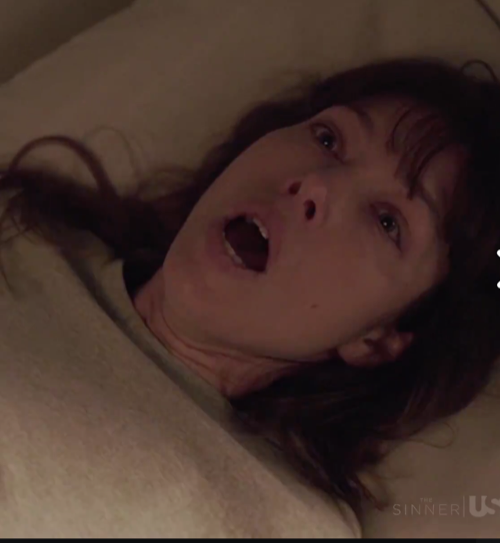 Tonight on the USA Network their new drama The Sinner premieres with an all new Wednesday, August 9, 2017, premiere and we have your The Sinner recap below. On tonight’s The Sinner season 1 episode 2 “Part 2” as per the USA Network synopsis, “Cora tries to block Ambrose’s continuing investigation, while Mason struggles to come to terms with secrets from Cora’s past.”

Cora pleads guilty and the judge asks why her lawyer is not speaking for her. The lawyer says she has declined my help. Cora says she knows she did it and wants it all to be over with. The judge orders a competency evaluation before she will accept the plea. Mason asks Cora what she is doing but she doesn’t answer as the bailiff takes her away. Detective Ambrose tells the other detective that he called the judge before the hearing and made his case as to why the evaluation was needed.

Detective Ambrose meets with Cora and tells her he knows she knew Frankie Belmont but she denies it. He asks why she won’t help herself. He tells her she could get her life back. Cora asks what makes him think she wants her life back. The scene flashes to Cora’s childhood. Her father is carried her younger sister to her own room and bed. He yells to her mother that he needs to get his sleep but her mother says the girl needs her. Father comes to her room and undresses as the door closes.

The detectives and prosecutor meet and talk about the case. If this goes to trial they have to find a motive. Detective Ambrose speaks to Frankie’s wife to see if she can remember anything more about the murder. She doesn’t remember anything from that day that is helpful but said Frankie talked about a girl her used to have a deep connection with before they met. There was a horrible accident and Frankie’s friends say he change after that.

Cora is asleep in her cell and has a dream of a woman asking her if she is coming. She awakes in a fit. Detective Ambrose is staying in the other detective’s basement. They eat breakfast and get ready for the day. Mason goes back to work but a woman is uncomfortable with him helping her. He over hears her tell a friend he is creepy. The scene flashes back to Cora working as a waitress serving a drink to Mason. This was their first meeting and he walks her home after she gets off work.

Detective Ambrose and his wife have a therapy session. She tells him she feels invisible to him. They haven’t had sex in so long and she doesn’t feel like he would even notice if she was gone. Cora listens to a group of women pray in prison and she flashes back to a group of women praying over her sister. Her aunt tells Cora she has to leave for a few days but that they all have to pray for Phoebe (Cora’s little sister). She gives Cora a candy bar and tells her to eat before her mother sees it. Cora puts it in her secret hiding place with all the other items her aunt has given her. Back in present time Cora sits with detective Ambrose. He says he knows she is not mentally ill and he will find out why she killed Frankie.

Ambrose tells Cora her actions are hurting her family and he will not give up until he finds out why she did what she did. Cora admits she knew Frankie before the murder. She met him five years ago at a bar. She thought his name was JD. It was the 4th of July weekend and he had pills. She and his friends all took the pills and then went to house. He was playing music from a band he was in and they had sex. Three weeks later she realized she was pregnant but she couldn’t find JD. He had her number she didn’t have his. She was hit by a car later and lost the baby. She tells Ambrose she used to pray all the time when she was younger but it did no good. She asks what kind of God kills your baby and lets you live.

Ambrose and the DA watch a tape of his conversation with Cora. The DA is happy that they now have a motive. Cora flashes to her childhood. She is kneeing in the yard in the dark praying to God that her sister is healed. Her mother comes out and says Phobia reminder her that Cora had been outside for over an hour. Her mother says she thinks God will answer Cora’s prayers. Her mother makes Cora bury all of her treasures her aunt has given her. She tells Cora that even one bite of the chocolate could anger God and make him take Phobia’s life.

Ambrose meets with his girlfriend and tells her he can’t see her anymore. He has to try to work it out with his wife. Mason sits on his bed and remembers a time he and Cora had sex. She acted very strangely. Ambrose and his wife are at their daughter’s house for their grandson’s birthday. He is not happy with the gift Ambrose bought. Ambrose tells his wife is it so nice to be with her and asks her if he can come home. A police officer who went to high school with mason comes to ask if Cora ever mentioned Frankie to him but he says no. She than askes about JD but he also didn’t know of a JD. He asks her to please tell him anything she might know. She says JD and Cora had a one night stand and JD got Cora pregnant.

Ambrose reviews all the evidence and listens to the song that was playing when Cora killed Frankie. He goes to the bar where Cora says she met Frankie. The waitress remembers Cora but doesn’t remember Frankie. Ambrose interviews Frankie’s parents but they don’t believe what Cora said. Frankie’s parent say that he wasn’t even in the state five years ago on the 4th of July he was in Los Angeles. Cora has been lying to Ambrose. He also finds out that Cora’s parents are alive. Cora is in her cell and remembers back to her childhood. Her mother is cleaning her sister’s sores and her sister cries out in pain. Cora’s mother tells her Phobia is sick because of Cora. She tells Cora to tell Phobia what she did. Cora tells her sister she is a sinner because she took the chocolate from her aunt. Cora then runs out to the yard and digs up the chocolate and eats it.

In present time Ambrose asks Cora why she lied about her parent’s being dead. He says he knows everything she said about Frankie was a lie. He plays the music from Frankie’s band and Cora gets agitated and demands he turn it off. Ambrose refuses and Cora attacks him. She screams that she is going to kill him. Mason goes to visit Cora and tells her he knew JD and asks if he hurt her. Cora will only talk about their son. Mason goes to his friend’s house and asks if he can help him find JD.
Ambrose moves back in with his wife and as they eat a bird hits their window. He helps it fly away.

Ambrose realizes that the bruises he has from when Cora hit him are in the exact same place as the stab wounds Frankie has. She stabbed Frankie seven times and she hit him Ambrose, seven times. That music triggers something in her and she completely losses control.