BY Sean O'Brien on October 7, 2017 | Comments: one comment
Related : Soap Opera, Spoiler, Television, The Young and the Restless 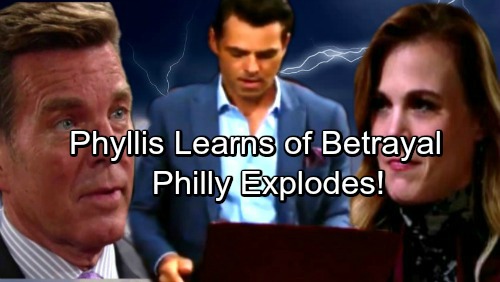 The Young and the Restless spoilers tease that Phyllis’ (Gina Tognoni) world is about to change. The current love of her life, Billy-boy Abbot (Jason Thompson) has already betrayed her trust. Now, the inevitable end of Philly is about to unfold.

What was Phyllis thinking when she coupled with Billy? She couldn’t possibly have logically thought all would flow well forever. Of course, Billy has a way of wooing women, which pushes emotional logic to the fray. Just ask Victoria (Amelia Heinle) her opinion of that topic, when she’s clear-headed.

What was Billy thinking when he used Phyllis’ corporate laptop, entered the password he stole from Dina (Marla Adam) and downloaded Jabot’s files? Though the word thinking advised that it didn’t want to be seen aside of the name Billy. So the answer to the above question lies in that verb’s reaction.

The formation of Philly involved need. Phyllis felt alienated from Jack (Peter Bergman), who was one of her three soul mates, along with Danny (Michael Damian). Nick (Joshua Morrow) never was that, as Phick’s twisted relationship was purposely invented as part of the detestable Cassie (Camryn Grimes) dies arc.

Phyllis needed someone and believed that she found a friend in Billy. Over time she convinced herself that he was her new love. On his end, Billy (initially played by Burgess Jenkins in this sequence, until Thompson took over) was waiting for Vickie to tell him yes again. He waited through all of her many mood swings and his own, until the draw of Phyllis became too strong.

Billy’s persona doesn’t allow him to feel complete unless a woman is in his life and is telling him what to do. The same can be said about Phyllis where men are concerned. That commonality wasn’t and isn’t the basis of a sustainable match.

Vickie is Billy’s out. He knows, underneath it all, that Vickie is his true soul mate, not Phyllis. Subconsciously, he’s likely trying to destroy Philly. Doing so would leave him fully available to Vickie and to his children that she’s raising.

Phyllis will be left in the cold when, not if, Philly falls. Part of Jack’s heart will always be owned by the former Red. But he’s currently not open to taking her back again. Smilin’ Jack will actually delight in seeing the end of a relationship that he believes destroyed his marriage.

In retrospect, all fans who argued that Philly’s pairing was illogical from the jump, based on historical storylines and then current factors were right. They deserve to be credited for their balanced use of logic and emotion.