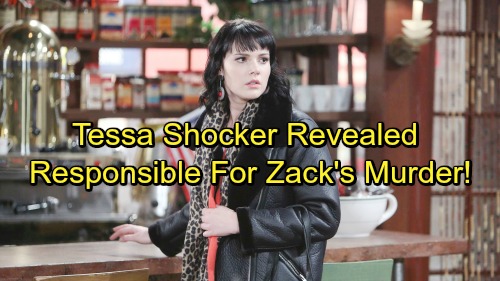 The Young and the Restless (Y&R) spoilers tease that Tessa (Cait Fairbanks) will be under fire next week. Paul (Doug Davidson) will explain that the gun Crystal (Morgan Obenreder) used to kill Zack (Ryan Ashton) belonged to a Newman family member. He’ll fill in Victor (Eric Braeden), who will undoubtedly insist that he’s innocent.

Genoa City gossip suggests that Victor hired Crystal to commit murder, but that seems too easy. It looks like Y&R will throw in a twist to make this a little more interesting. Once Nikki (Melody Thomas Scott) gets updates on the situation, she’ll have a different suspect in mind. It appears she’ll accuse Tessa of stealing a gun from one of the Newmans and giving it to Crystal.

Tessa knows her way around the ranch, so she must’ve seen where Victor keeps his guns. When Tessa was helping Crystal disappear, she may have swiped one to give her sis some protection. Of course, it’s possible Noah (Robert Adamson) had a gun as well. Tessa could’ve given her beau’s weapon to Crystal instead.

Regardless, Nikki won’t be happy about the added trouble. She’ll feel like Tessa made a bad situation worse. Nikki might rant about Tessa facilitating murder, but it’s doubtful that was her intention. Tessa certainly doesn’t mind that Zack’s dead, but she probably just wanted Crystal to have a way to defend herself.

Tessa knew Zack or his thugs could come after Crystal at any moment. By publicly exposing the sex ring, Crystal made herself an even bigger target. Tessa couldn’t send her sister off without giving her a chance to protect her own life. She probably had no idea that Crystal was going to seek out Zack and shoot him.

Will Nikki be able to understand that? Will she soften toward Tessa or continue to blame her for the Newman drama? The Young and the Restless spoilers say Tessa will long for a friend after all this chaos plays out. Let’s hope Mariah (Camryn Grimes) and Tessa will patch things up soon.