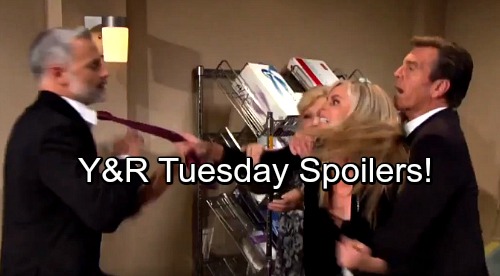 The Young and the Restless (Y&R) spoilers for Tuesday, October 17, tease that Dina’s (Marla Adams) personal physician will arrive at the hospital. Ashley (Eileen Davidson) will object at first, but Graham (Max Shippee) will insist that this doc can give Dina the best care. Once Dina’s thoroughly examined, Graham and the Abbotts will learn she had a stroke. Dina will have to stay in the ICU for a while.

Ashley and Graham will get into a heated argument about why Dina’s in this predicament. The Young and the Restless spoilers say Ash will blame everything on her mother’s manipulative companion. Graham will respond by ranting about Ashley’s pathetic father. He’ll argue that his daughter turned out just the same.

Jack (Peter Bergman) will have to step in when Ashley dives for Graham. He’ll convince her to back off when it comes to physical confrontations, but he’ll be ready to come for Graham in court. Jack will get some paperwork going in hopes of banning Graham from Genoa City, but that plan won’t work out like Jack expects.

In the meantime, one visitor will be allowed in Dina’s room. The Young and the Restless spoilers say Graham will insist on going first. He’ll think he’s entitled to since he has Dina’s medical power of attorney. Across town, Noah (Robert Adamson) will get a shock. He’ll read an article that indicates Nick (Joshua Morrow) gave his fortune to charity.

Later, Noah will find Nick and Sharon (Sharon Case) arguing about the money move. Sharon will feel like that wealth should’ve been kept to provide security for their kids. Nick will ask Noah to back him up, but his son will take Sharon’s side instead. Noah and Sharon think something needs to be done to stop Nick and Victor’s (Eric Braeden) war.

At Top of the Tower, Nikki (Melody Thomas Scott) will also try to end the conflict. She’ll encourage Victor to stop the madness, but he’ll think that’s Nikki’s choice to make. Victor will argue that if Nikki returns to the ranch, things could get back to normal. Y&R spoilers say Nikki will reject that idea and stomp off.

Afterward, Nick will find Victor and note that he gave a great deal of his money to orphans. He’ll indicate that he thought it was important considering Victor’s background. Victor will seem pleased by the decision. They’ll eventually shake hands and make peace, but is this really the end of all the fighting?

Something tells us Victor could still have a trick or two up his sleeve. Will Victor double-cross Nick? How long can this truce last? We’ll give you updates as other Y&R news comes in. Stay tuned to the CBS soap and don’t forget to check CDL often for the latest Young and the Restless spoilers, updates and news.