BY Heather Hughes on September 28, 2017 | Comments: one comment
Related : Soap Opera, Spoiler, Television, The Young and the Restless 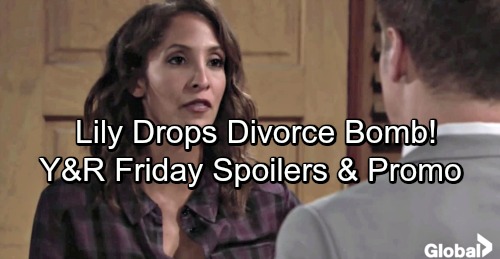 The Young and the Restless (Y&R) spoilers for Friday, September 29, tease that Mariah (Camryn Grimes) will come up with a new plan. She’ll drop a hint to Tessa (Cait Fairbanks) in the stables before heading in the house. After Scott (Daniel Hall) takes off, Sharon (Sharon Case) will get shocking news. Mariah will admit that they kidnapped Alice (Tamara Clatterbuck) and she’s tied up on the property.

Sharon will agree to keep Paul (Doug Davidson) out of the loop for now. She’ll decide to go along with Mariah’s idea to gaslight Alice. Back in the stables, Mariah will convince Alice that she’s actually Cassie (Camryn Grimes). They’ll bicker about whether Alice is helping or hurting those girls.

Meanwhile, Hilary (Mishael Morgan) will try to talk some sense into Lily (Christel Khalil). She’ll contend that Cane (Daniel Goddard) is heartbroken and deserves another chance. Lily will urge Hilary to butt out, so the meddler will eventually exit. Once Michael (Christian LeBlanc) shows up, Lily will admit she’s ready to file for divorce.

At the athletic club, Hilary will give Cane some advice. She’ll believe he needs to get the pregnancy drama off Lily’s mind. Hilary will think sending Juliet (Laur Allen) back to Tokyo is Cane’s best option.

After Juliet arrives, Hilary will begin her pitch. She’ll suggest that Juliet made quite a name for herself in Japan. Cane will back Hilary up until Michael walks in. He’ll stun Cane with Lily’s divorce bomb. Nearby, Hilary will encourage Juliet to leave Genoa City. She’ll argue that Cane will grow resentful if Juliet sticks around.

The Young and the Restless spoilers say Juliet will refuse to give up her shot with Cane. She’ll think she can win him over sooner or later. At home, Lily will give Jordan updates on her impending divorce. He’ll decline the opportunity to chime in on this. Jordan will believe only Lily can decide what’s right.

At Newman Enterprises, Scott and Abby (Melissa Ordway) will insult each other as usual. Abby will reflect on her failed marriage and suggest that Scott’s romance may not work out either. She’ll warn that Sharon and Scott are too different to make it work.

Other Young and the Restless spoilers say Devon (Bryton James) will be perplexed by Kevin’s (Greg Rikaart) behavior. When Kevin seems doubtful about Mariah and Devon’s future together, it’ll create questions. Devon will wonder if Kevin knows more than he’s letting on.

Kevin will stay tight-lipped about Mariah’s feelings for Tessa. He’ll simply indicate that relationships can be unpredictable. How long will it be before Devon learns the truth? We’ll keep you posted as other Y&R details emerge. Stick with the CBS soap and don’t forget to check CDL often for the latest Young and the Restless spoilers, updates and news.