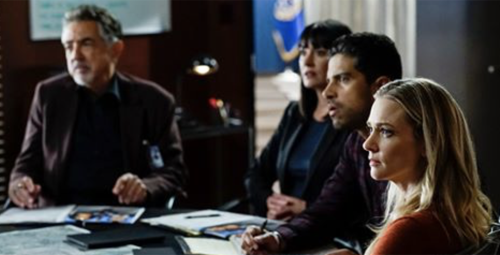 Tonight on CBS their hit drama Criminal Minds returns with an all-new Wednesday, January 24, 2018, episode, called “Full-Tilt Boogie,” and we have your weekly Criminal Minds recap below. On tonight’s Criminal Minds episode season 13 episode 13 as per the CBS synopsis, “The BAU is called to New York when several casualties of a brutal nature are reported in Central Park.”

JJ was concerned about her job on tonight’s all-new episode of “Criminal Minds” when she received an email from Linda Barnes. Barnes was the same woman that had kicked her off the team the last time and in the email, she had also included Emily Prentiss. But Prentiss hadn’t brought up the email to JJ and JJ didn’t know how to address the issue on her own. She merely sat on the issue even as the team was called in on an active homicide in the DC area. DC Metro had called the team to the scene of Andrew Hirota’s murder because the victim had been bound and stabbed with a rare knife through the Unsub had also painted a symbol on the wall in Hirota’s blood.

The symbol was that of Asclepius. Asclepius was a mythical god of healing and medicine, but his symbol wasn’t the one that was commonly seen in front of pharmacies and hospitals because it had gotten confused with something else back in the early twentieth century. So the fact Reid knew all of this came in handy because Asclepius was something that was going to bring up again when the team received a mysterious phone call from the Unsub. The Unsub had claimed “We Are Asclepius, We Are the Cure” and that made the team believe they were dealing with an organization.

There have been several organizations over the years that claimed they wanted to heal the world by ridding it of something or someone, yet in this case, the group that was calling themselves Asclepius had killed Hirota and had in fact gone out of their way to do so. He had been in finance and had a security system as well as a partner that had been there at the office when he was killed. However, the Unsub had left Abigail Fuller more or less alone because he had only left her bound and gagged. She had otherwise been fine and so later she tried to give the team as much information as she could which wasn’t much.

Abigail told them that Unsub had been covered from head to toe in riot gear and that throughout the whole ordeal he had never mentioned one single word. So that’s what unnerved Abigail the most and she just wishes that she had called out. She told the team that if she did that maybe Hirota could have gotten out of there in time or at least call for help except the guys did their best to comfort her. She wasn’t to blame for what the Unsub did and unfortunately, they all learned the Unsub’s intentions when they unlocked his cryptogram. The cryptogram had been shoved down Hirota’s throat and in it, the Unsub revealed that Asclepius was curing the world of impotent men as well as the disease they create.

Except there were several things about the message that hadn’t seem to make sense for the team. They had all looked it and they questioned the highly sexualized language, this disease the Unsub was talking about, and why the Unsub had left the message in his victim’s throat when they were several other options he could have taken. The Unsub could have posted the manifesto online or on social media and the whole shoving it in the throat ensured only a handful of people will ever get to see it. So the team had to question everything and they were still on the backfoot when the Unsub killed again.

The Unsub had killed a man named Douglas Carmichael who another wealthy man and he had been killed the same way with one exception. That time the Unsub had killed their victim right outside his office and he had even shut down the security feed a full hour before he made his move. So the Unsub was tech savvy and had no problem with stalking his victims to ensure that everything went according to the plan, but the second message had been set with a new cipher and so it took both Garcia and Reid sometime before they eventually cracked it using the word “cure”. The word unlocked a document that read there had been three victims instead of two and so the team had been forced to check their records to see if a victim had gone unidentified.

What they found was Marcus Powell. Powell had been killed the same way and the hidden message had been in his belonging when he was found so that’s how they didn’t know his case related. But the team were trying to crack that message when they heard of a fourth victim. That victim had gotten to the hospital in time because his girlfriend had interrupted the crime in progress and stopped the Unsub from going any further. So the team had the chance of questioning the victim, Scott Taveras, and they didn’t know why he was chosen. He was a family court judge and he hadn’t been in control of millions.

So when they read the first manifesto and realized the Unsub hadn’t been an ideologist though did sound like a kid with a grudge – they became suspicious of Scott’s son Rafael. Rafael had been in military school and had been dishonorably discharged from the army meaning he had the military training to carry out all the attacks however what truly made them suspicions was when he attacked his father. His father Scott was formally separated from his wife Julia who by the way was six months out of remission and Scott had moved on with his girlfriend Elena. Elena explained how the married couple had planned on separating six years ago and that they put it off when his wife became sick.

Scott hadn’t wanted to put his kids through anything else at the time and so he had waited till he was finally able to be with Elena. Yet, Rafael never forgave for that and, when the police weren’t looking, he kidnapped Elena because he hadn’t been able to kill his father. So they later found Rafael in the trunk of his own car and he had tried to claim that he saw someone kidnapping Elena, but had gotten knocked out when he tried help and so the team played along. They did their best to make him believe he wasn’t a suspect because they still thought they was a chance they could find Elena alive. And sadly they had been wrong.

By time Rafael gave up her location, he had already killed her because he thought that was the only way his father could learn. It had been Scott the whole time and Rafael had merely killed the others because he had hoped to hide his father’s death in the mounting body count.