BY hellodrdavis on November 16, 2018 | Comments: one comment
Related : Days of Our Lives, Soap Opera, Spoiler, Television 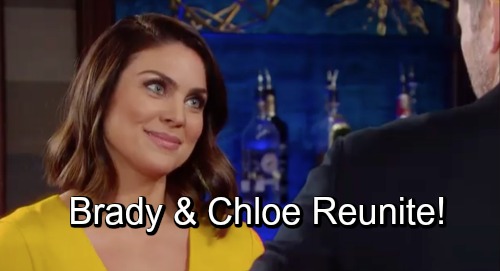 Days of Our Lives (DOOL) spoilers tease that Brady (Eric Martsolf) and Chloe (Nadia Bjorlin) may be drawn together in the coming days. These exes haven’t spent much screen time together lately, but that may be about to change. Several things have happened recently, or are about to happen, that point to a possible renewed relationship between Brady and Chloe.

First off, Brady just lost Eve (Kassie DePaiva), who walked out on him after he revealed that he slept with Kristin (Stacy Haiduk). That leaves Brady single and on the lookout for a new love interest. Since Brady never stays single for very long, we’ll probably see him gravitate to someone rather quickly. And it makes sense that he might turn to someone familiar.

Then we’ve got Chloe, who is currently in a relationship with Lucas (Brian Dattilo), but that’s all changed. Lucas is heartbroken over being duped by Bonnie (Judi Evans) into believing that he had a new little daughter, and he left Salem. That brings Chloe and Lucas’ relationship to an end, making her a prime candidate for Brady.

And Chloe may need some support, since it looks like she’s going to throw her hat in the ring for custody of Nicole’s (Arianne Zucker) daughter Holly. Chloe will need someone to believe in and encourage her, and Brady would be the perfect person to do that. Brady may even step in and offer to help Chloe raise Holly since Brady feels so responsible for Nicole’s death.

The Days 2018-2019 video promo also supports the idea of a new Chloe-Brady pairing. Chloe and Brady are shown together, looking at each other lovingly, as Brady supports Chloe in her quest to be a mom figure for Holly. “You have me. I’ll be there for you. For you and Holly,” Brady promises.

It should be noted that if Chloe and Brady do get together, it will be the first time that Chloe and Eric Martsolf’s version of Brady will be paired. When Chloe and Brady were married from 2005-2008, Brady was portrayed by Kyle Lowder, who’s now portraying Rex.

Would you like to see Brady and Chloe together again? Stay tuned to DOOL and don’t forget to check CDL often for the latest Days of Our Lives spoilers, updates, and news.