Days of Our Lives Spoilers: Chad and Sonny Team Up to Save Dying Julie – Guilty Gabi Faces Questions After Staircase Disaster 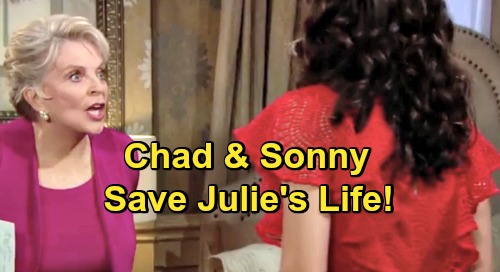 Days of Our Lives (DOOL) spoilers tease that Chad (Billy Flynn) and Sonny (Freddie Smith) are in for a shock. They’ll find the aftermath of a nasty confrontation and wonder how it all went so horribly wrong. Gabi (Camila Banus) and Julie (Susan Seaforth Hayes) will be the participants in this stunning showdown. After Julie finds evidence of Charlotte’s true paternity, she’ll be prepared to unleash it.

That’s when things will escalate at the top of the staircase. Whether Gabi shoves Julie or simply rages at her while she’s too close to the edge, you can bet she’ll be responsible. Of course, Gabi will deny any wrongdoing after Julie’s scary fall. She’ll do everything in her power to avoid looking guilty.

Before Sonny and Chad can get answers, they’ll have to leap into action. Sonny’s furious with Chad for keeping Kate’s (Lauren Koslow) sexual harassment scam a secret, but he’ll put his issues on hold. In this moment, all that’ll matter is coming together to save Julie’s life.

Chad and Sonny will call 911 as well as tend to Julie in any way they can. Days of Our Lives spoilers say they’ll worry she’s not going to make it. Julie means a great deal to a lot of people in Salem. She’s a DOOL staple, so Sonny and Chad will really be feeling the pressure.

Thankfully, Julie will survive her trip to the hospital. She’ll receive excellent care, but that doesn’t mean the road ahead will be easy. Days of Our Lives spoilers say Doug (Bill Hayes) will fear the worst as Julie struggles next week, December 17-21. He’ll need the support of Hope (Kristian Alfonso), Jennifer (Melissa Reeves) and anyone else who’s willing to be there for him.

As for Gabi, Days spoilers say she’ll face plenty of questions. Chad and Sonny should demand an explanation once Julie’s loaded in an ambulance. They’ll want the full scoop, but Gabi won’t be willing to disclose the real reason they were fighting. She’ll probably just suggest that Julie started ranting about Nick (Blake Berris) again.

There’ll be more questions to come from the cops, so Gabi had better get used to grilling sessions! We’ll give you updates as other Days news comes in. Stay tuned to DOOL and don’t forget to check CDL often for the latest Days of Our Lives spoilers, updates and news.