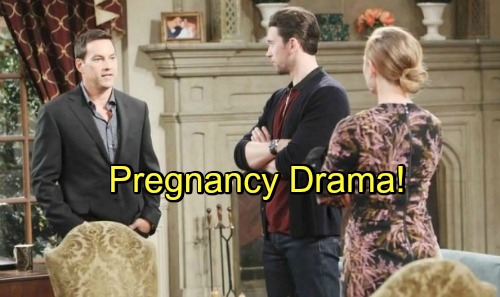 Days of Our Lives (DOOL) spoilers tease that Chad (Billy Flynn) will be excited about Abigail’s (Marci Miller) return. She’ll make it back to town next week and reveal that she’s wrapped up her therapy. It seems Abigail’s DID is under control and she’s ready to resume her old life.

Unfortunately, Abigail will be left with a grim reminder of her alter’s actions. She’ll eventually tell Gabi (Camila Banus) that she may be expecting. Abigail will admit if she is, the paternity’s uncertain. She’ll be scared to take a pregnancy test, but she might as well. If Abigail’s pregnant, she’s pregnant. A test won’t change what’s already happened.

It looks like Abigail’s fears will be confirmed. She’d love to have another baby with Chad (Billy Flynn), but the thought of having Stefan’s (Tyler Christopher) kid will fill her with dread. It’ll be a while before Abigail can get the answers she needs. Until then, she’ll have to wonder, wait and worry.

Meanwhile, Chad will remain in the dark on Abigail’s DOOL dilemma. He’ll just know that she’s home and needs to be protected. Days of Our Lives spoilers say Chad will have another heated confrontation with Stefan. Chad physically attacked his brother during their last two. The good news is he’ll probably control himself this time around. The bad news is his main goal won’t be accomplished.

Days spoilers state that Chad will offer a stern warning. He’ll order Stefan to steer clear of Abigail or else. Chad will insist that his wife wants nothing to do with Stefan. “Gabby” may have cared about him, but Abigail just wants him out of her life.

Chad can’t handle the idea of Stefan coming back around and making another move. After he threatens Stefan, he’ll hope that they can all move on. That’s the goal Chad won’t achieve. Since Abigail’s facing a paternity mystery, Stefan will soon be more involved than ever. Once he gets the scoop, you can bet he’ll envision building a family of his own with Abigail.