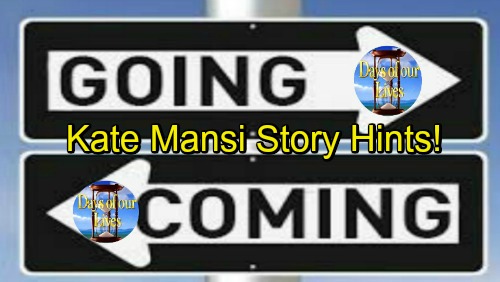 Days of Our Lives (DOOL) spoilers tease that we’ve got some comings and goings news to pass along. First, we should talk about Clyde (James Read). He recently popped up in Ben’s (Robert Scott Wilson) hallucination as well as in the flesh with Hope (Kristian Alfonso) and Rafe (Galen Gering).

Clyde finally vanished from Ben’s mind thanks to Ciara’s comfort and coaxing. As for the real one, he refused to cooperate with the Salem PD and was sent back to his cell. It seems like Clyde’s served his purpose for now. Unless Ben has another quick relapse, Clyde’s probably done for a while.

Other Days of Our Lives spoilers say Gwen McGee will be back as Judge Duncan. She’s been tough throughout the custody hearing, but the worst is still to come. Some serious shockers are coming up, so DOOL fans won’t want to miss the rest of this hot storyline.

Of course, we’ve also got an Abigail swap coming up down the road. Marci Miller finished filming on May 25, but Kate Mansi stepped up to play the role again. The show tapes a few months in advance, but this Abigail switch is sure to shake up Salem eventually.

In Soap Opera Digest, both actresses discussed their mutual role and the changes happening behind the scenes. Marci Miller noted that she was ready to spread her wings, so she chose not to hear any offers from Days. She admitted, “The asked if there was anything they could do to keep me and I said, ‘No.’”

However, Miller insisted that Mansi’s return was the “best-case scenario.” She talked about the respect she has for Abigail’s previous portrayer and Mansi echoed the sentiment. Before Mansi took over, they both sat down for a chat to discuss this transition and acknowledge each other’s work.

As for Mansi’s latest run as Abigail, good things are brewing. “I can’t read the scripts fast enough,” Mansi gushed. “I am so excited for everyone to see the great stuff we have coming up.” Set insiders reveal that the show wants Mansi to stick around long-term, but can Days convince her? Let’s hope so!