Days of Our Lives Spoilers: Dangerous Rescue Mission Ahead – John and Paul Rush to Save Chloe In Mexico

BY Heather Hughes on May 15, 2018 | Comments: 2 comments
Related : Days of Our Lives, Soap Opera, Spoiler, Television 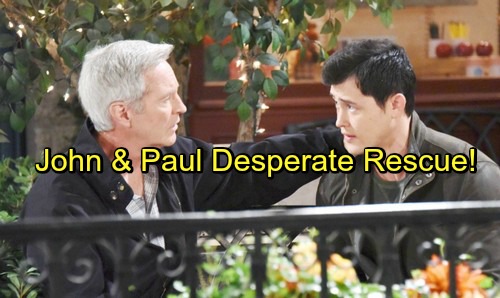 Days of Our Lives (DOOL) spoilers tease that Chloe (Nadia Bjorlin) will get some devastating news. Mateo (Andoni Gracia) will be the one who passes along these horrifying updates, so that’ll make things even worse. He’s the last person Chloe wants to hear a shocker from.

It sounds like Mateo will explain that he handed Theresa over to Xander (Paul Telfer). Chloe may fear for Theresa’s safety, but she won’t have the whole story. Xander and Theresa actually made a deal, but they had to leave Chloe behind. Although it was tough Theresa to bail on Chloe, she really had no choice.

Fortunately, Theresa can still be Chloe’s ticket out. If she’d stuck around, it wouldn’t have done either of them any good. At least Theresa can fill Lucas (Bryan Dattilo) in once she’s back in Salem. Chloe will suffer in the meantime, but Theresa undoubtedly made the right call.

Days of Our Lives spoilers say Lucas will be desperate to find Chloe ASAP. Theresa may be able to point Lucas toward Mateo’s house, but he’ll still need some help with this mission. That’s where John (Drake Hogestyn) and Paul (Christopher Sean) will come in. They’ll gladly agree to carry out this epic rescue.

DOOL fans can expect Paul and John to make the trip to Mexico City. Lucas may serve as a distraction or he could simply get out of their way. Regardless, John and Paul are probably more equipped to handle this situation. They’ve been in all sorts of tight spots over the last few years, so they’ve been keeping up with the necessary skills.

It’d be more fun for Lucas to play the hero, but maybe Days is just trying to be realistic. Whatever the case, Days of Our Lives spoilers say John and Paul will take action next week. They’ll show up at Mateo’s place on May 25, so they’ll be ready to find a sneaky escape route and hustle Chloe out.

Will Paul and John pull off their plan? Will they save the day or does DOOL have some surprising snags in mind? We’ll keep you posted as other Days details emerge. Stay tuned to the NBC soap and don’t forget to check CDL often for the latest Days of Our Lives spoilers, updates and news.