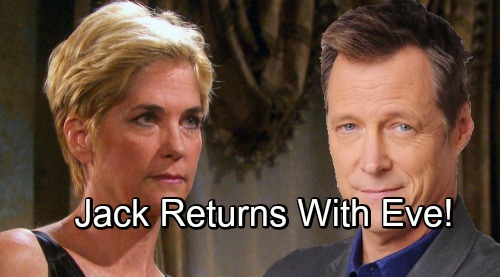 Days of Our Lives (DOOL) spoilers tease that Eve (Kassie DePaiva) will keep a payback promise and it should bring some serious drama. After vowing revenge on Jennifer (Melissa Reeves), Eve won’t be seen on canvas for a while. She’s bailing during Halloween week, but her comeback will hit on another major holiday. It turns out Eve will return on a day that’s very fitting for her: New Year’s Eve.

What will lead to Eve’s change of heart? There’s a good chance it’ll be connected to her vengeful mission. Of course, dumb luck may be involved as well. Days of Our Lives spoilers say Matthew Ashford is headed back to DOOL as Jack. He’ll be sticking around long-term, which means he’ll have to be around in the flesh.

Since his death, Jack has been seen in the imaginations of his loved ones and in fake flashbacks. However, Days has a more substantial story in mind. Since Eric (Greg Vaughan) split from Jennifer and will be inching toward Sarah (Linsey Godfrey), Jenn’s going to need another love interest. Why not reunite Jack with Jennifer and capitalize on a classic Days of Our Lives love story?

That seems to be what the show has planned, but not so fast! They can’t make it that easy. Perhaps Eve will cause a roadblock to Jack and Jenn’s happiness. There’s a chance she’ll stumble across Jack somewhere and keep Jennifer out of the loop. Jack may have amnesia, which could give Eve the opportunity to win him over herself. She might even marry Jack before dropping the bomb on Jennifer.

Jennifer and Eve have a history of fighting over men, so it’d be perfectly reasonable. Days of Our Lives spoilers say these two won’t be making amends anytime soon. That’s especially true if they start sparring over Jack again!

Jack and Eve already have one annulled marriage, but they could be gearing up for another one. If Eve makes her move with him, it’ll only end in heartbreak and disaster. Jack and Jennifer are clearly meant to be. One way or another, Eve may bring Jack back into Jennifer’s life and set their reunion in motion.

Do you think Eve’s return will be linked to Jack’s looming comeback? Are you excited to see Jack and Jennifer back together eventually? We’ll give you updates as other Days news comes in. Stay tuned to DOOL and don’t forget to check CDL often for the latest Days of Our Lives spoilers, updates and news