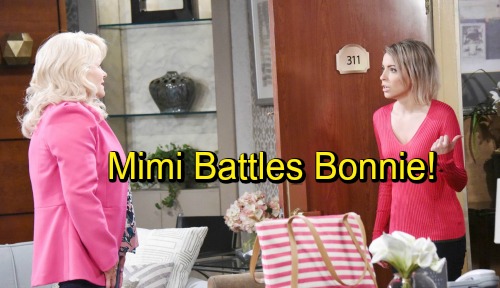 Days of Our Lives (DOOL) spoilers tease that Bonnie (Judi Evans) will face some serious opposition when Mimi (Farah Fath) returns to Salem. Bonnie has convinced Lucas (Brian Dattilo) that he fathered Baby Bonnie back in 2017 when Lucas thought Bonnie was Adrienne (Judi Evans). And by threatening to keep Baby Bonnie from Lucas unless he helped her get out of jail, Bonnie scored her freedom.

But now Bonnie’s daughter Mimi is about to burst back onto the Salem scene. A while back, Bonnie called someone to come get Baby Bonnie at the police station and hold her in an undisclosed location while Bonnie brokered a deal with Lucas and Justin (Wally Kurth). It certainly looks like that person will end up being Mimi.

But it doesn’t appear that Mimi will be too happy about her mother’s situation. Days spoilers say that Mimi and Bonnie will have a heated argument over Bonnie’s plan with Baby Bonnie. Mimi won’t like what Bonnie has done, and how she’s used Baby Bon Bon to score her freedom, and she’ll come down hard on Bonnie for it.

There’s been speculation that Baby Bonnie is actually Mimi’s baby, and if that’s true, then it’s easy to see why Mimi would be upset about what Bonnie has done. Or, Baby Bonnie may actually be Bonnie’s child and Mimi is just upset that Bonnie has used her own baby to negotiate her freedom for some very serious crimes.

At any rate, Mimi and Bonnie are going to clash big time, just as they have so many times in the past. Mimi will probably refuse to do Bonnie’s bidding, and Bonnie will plead with her daughter to help her so her mama doesn’t go back to jail. But will Mimi keep Bonnie’s plan going, or will she expose whatever secret is underlying Bonnie’s scheme?

Do you think Mimi will bust Bonnie’s plan wide open? Stay tuned to DOOL and don’t forget to check CDL often for the latest Days of Our Lives spoilers, updates, and news.