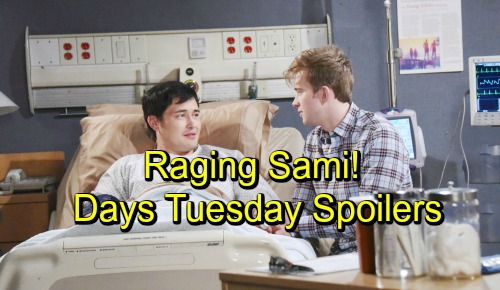 Days of Our Lives (DOOL) spoilers for Tuesday, October 2, tease that John (Drake Hogestyn) will rush over to Marlena’s (Deidre Hall) hidden room. Hattie (Deidre Hall) filled her new hubby in on Kristen’s (Stacy Haiduk) recent visit, so John’s obviously concerned about the real “Doc.” As he makes his way to see Marlena, he’ll just hope he’s not too late to save her.

Of course, Kayla (Mary Beth Evans) and Roman (Josh Taylor) have already got that covered. The gun went off thanks to Roman and Kristen’s struggle, but no one will be hurt by the shot. Days of Our Lives spoilers say the bullet went straight into the ceiling, so there’ll be no bloodshed in Tuesday’s episode.

Roman will lose his grip on the situation, but Kayla will gain control by snatching the weapon. After Kristen flees, John will burst in and see that his love’s awake. He’ll make sure Marlena’s OK and let her know that he never gave up on her. Days spoilers say they’ll share a special moment, so “Jarlena” fans will want to stay tuned.

Meanwhile, Sami (Alison Sweeney) will return to Marlena’s room and get quite a shock. She’ll realize Hattie’s the one in her mom’s hospital bed. Sami will assume this is Hattie’s scheme, so she’ll rip into her with everything she’s got. Fortunately, John and his accomplices will provide updates soon enough.

At the loft, Days of Our Lives spoilers say Ben (Robert Scott Wilson) will offer an explanation of his own. He’ll stun Ciara (Victoria Konefal) and Tripp (Lucas Adams) with the news of his release. The fingerprint on the accelerant can was transferred from another surface, which means Ben was set up. Tripp will get a bit territorial thanks to Ben’s return, so Ciara should get caught in the conflict.

Over with Will (Chandler Massey), he’ll decide to make a bold move. DOOL viewers know Paul’s (Christopher Sean) been struggling with doubts about their relationship. He doesn’t want Will to stay with him out of pity or obligation, so Will’s got some work to do. It’s true that he wants to be with Sonny (Freddie Smith), but he certainly won’t tell Paul that.

Instead, Will’s going to prove his love with a firm commitment. Will he pop the question or just make a stronger promise? Either way, Paul should be convinced that Will’s in this for the long haul.

Alas, Christopher Sean’s departure means Will and Paul’s romance is doomed. On the bright side, there’s hope for Will and Sonny’s reunion after all. We’ll keep you posted as other Days details emerge. Stick with DOOL and don’t forget to check CDL often for the latest Days of Our Lives spoilers, updates and news.