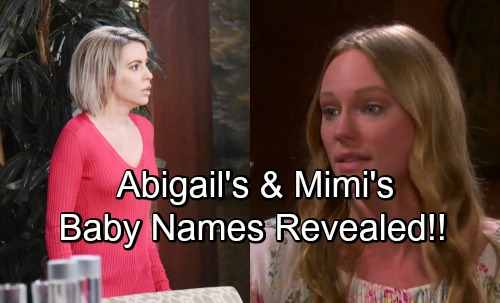 Let’s start with Abigail’s situation. Abigail has just married Stefan (Tyler Christopher) in order to avoid being committed by her now ex-husband Chad (Billy Flynn). She’s been set up by Gabi (Camila Banus) to make it look like her alter Gabby has returned. It’s a real mess, and Chad is at his wit’s end.

According to Days spoilers, Chad will kidnap Abigail with Ben Weston’s (Robert Scott Wilson) help to get her away from Stefan. He’ll hold her captive for a while in a cabin, where she’ll suddenly go into labor. The gender of the baby hasn’t been revealed on-screen thus far, but Days spoilers say that Abigail will give birth to a baby girl who she’ll name Charlotte.

As for Mimi, the ruse with Baby Bonnie will eventually come to an end, and Chloe (Nadia Bjorlin) will be the one to blow the lid off of the whole thing. Chloe will crash Rex (Kyle Lowder) and Sarah’s (Linsey Godfrey) engagement party with the results of a secret DNA test she ran confirming that Mimi, and not Bonnie (Judi Evans) is Baby Bonnie’s mother.

That will cause some explosive scenes for sure, and finally Mimi will be able to claim her child as her own. Of course, that also means that Rex will be identified as Baby Bonnie’s father, which will implode his relationship with Sarah. But on the bright side, he’ll be able to formally meet his daughter, whose real name will be revealed to be Emily.

What do you think of Abigail’s and Mimi’s baby name choices? Stay tuned to DOOL and don’t forget to check CDL often for the latest Days of Our Lives spoilers, updates, and news