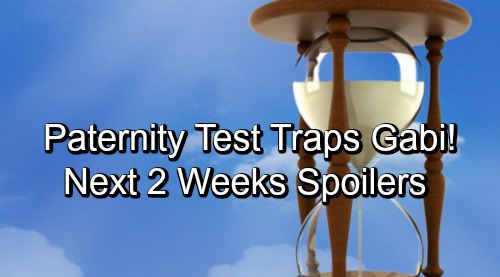 Days of Our Lives (DOOL) spoilers for the next two weeks tease that several Salemites will land in tight spots. During the week of November 26-30, Gabi (Camila Banus) will find herself on the hot seat. Kayla’s (Mary Beth Evans) been mulling over those sleeping pills she gave Gabi, who made sure they were safe during pregnancy. That finally raised red flags and now it’s time to confront Gabi about it.

Of course, Gabi will deny any wrongdoing and spin a tale to wiggle out of this. Kayla will still be keeping an eye on Gabi though. It’s clear that Gabi’s not quite as smooth as she thinks she is. Later, Rafe (Galen Gering) will have some questions for Gabi as well. He’ll get updates on Abigail’s (Kate Mansi) latest accusations and wonder if Gabi would really set her “bestie” up like that.

Abigail will also face off with Chad at Bayview while Sonny (Freddie Smith) and Will (Chandler Massey) are busy dealing with Leo (Greg Rikaart). He wasn’t really dead when they rolled him up in that rug, so he’ll explain how he came back and what he wants now. DOOL fans won’t want to miss Leo’s surprising story.

If Sonny doesn’t marry him, Leo will promise to cause loads of drama. He’ll also drop the bomb that Kate (Lauren Koslow) was behind the sexual harassment lawsuit. That’s sure to infuriate Will! Once Ben (Robert Scott Wilson) and Ciara (Victoria Konefal) share a kiss, they’ll decide to take the next step. The week of December 3-7 will bring their first date! It’s a night that “Cin” fans have been waiting on.

Love will also be in the air for John (Drake Hogestyn) and Marlena (Deidre Hall). Days of Our Lives spoilers say John will come up with some romantic plans for “Doc.” These two deserve some peace and happiness after everything they’ve been through lately!

Other Days spoilers state that Lani (Sal Stowers) and Eli (Lamon Archey) will feel the sexual tension. An electric moment will prompt Eli to demand some answers. He’ll want to know why Lani’s holding back when she’s obviously into him. Over with Chloe (Nadia Bjorlin), she’ll be thrilled to see Lucas (Bryan Dattilo). Unfortunately, their bubble’s about to burst all over again.

Days of Our Lives spoilers say Lucas will have some huge news. It’ll change the nature of their relationship, so it sounds like he may want to head back to Europe permanently. We know Lucas’ time on the NBC soap is wrapping up, so this seems like a mini return to make his exit official.

Back with Chad, he’ll find Gabi clutching Charlotte’s paternity results. Will he realize she’s been up to no good or will she talk her way out of trouble once more? Meanwhile, Stefan (Tyler Christopher) will believe “Gabby’s” back at last. He’ll try to get Abigail out of the sanitarium, but it appears she’ll actually be turning the tables!

Days of Our Lives fans won’t want to miss all the action. We’ll keep you posted as other details emerge. Stay tuned to DOOL and don’t forget to check CDL often for the latest Days of Our Lives spoilers, updates and news.