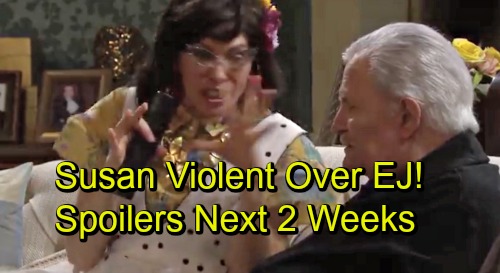 Days of Our Lives (DOOL) spoilers tease that the next two weeks will bring some startling moments. During the week of October 29-November 2, Hattie (Deidre Hall) will stun Roman (Josh Taylor) with her demands. She’ll worry that he’s deceiving her about his feelings, so she’ll push him to prove his love.

Hattie will demand a sex session, but Roman may find a way to wiggle out of this, no pun intended. He might argue that they should wed right away and save it for their first night as a married couple. Of course, DOOL fans know Roman’s playing Hattie at John’s (Drake Hogestyn) request. The plan will pay off when Hattie goes to John and insists on getting a divorce.

Other Days of Our Lives spoilers say Ben (Robert Scott Wilson) will open up to Ciara (Victoria Konefal). He’ll share a story that’s meaningful to him, so Ciara should be pulled even closer. Whether the memory’s good or bad, Ciara loves when Ben’s willing to be vulnerable with her.

Meanwhile, Sami (Alison Sweeney) will work on proving the mystery patient is EJ (last played by James Scott). His burns and bandages have left him unrecognizable, so Sami will need Kayla’s (Mary Beth Evans) assistance. She’ll hope a DNA test will do the trick, but she’ll soon realize Susan (Stacy Haiduk) may be the key to cracking this case.

Over with Chloe (Nadia Bjorlin), she’ll score proof that “Baby Bonnie” is Mimi’s (Farah Fath). At Rex (Kyle Lowder) and Sarah’s (Linsey Godfrey) engagement party, Chloe will burst in on a mission to spill the big news. The week of November 5-9 will lead to an explosion of Days chaos and conflict. Once Sarah learns Rex cheated and knocked Mimi up, she’ll unleash her wrath in a big way.

Elsewhere, Susan will have a stunning premonition. EJ will be featured in her latest vision, so she’ll demand answers from Sami. When Sami’s not quick to give them, Susan will make a desperate and dangerous move. She’ll pull a scalpel on Sami and insist on getting the truth about her son.

On a lighter note, Days spoilers say John and Marlena (Deidre Hall) will tie the knot – for real this time! Their last wedding was derailed by Kristen (Stacy Haiduk), but this one will go off without a hitch. It’ll be a smaller gathering, but Marlena and John won’t mind at all. They’ll just be happy they can finally resume their epic love story.

Regardless, as CDL reported, Chad will resort to kidnapping Abigail soon enough. He’ll take his ex hostage to get her away from manipulative Stefan (Tyler Christopher). Days of Our Lives spoilers say Abigail will go into labor soon after, so Chad’s in for a shock. We’ll give you updates as other details emerge. Stick with DOOL and don’t forget to check CDL often for the latest Days of Our Lives spoilers, updates and news.