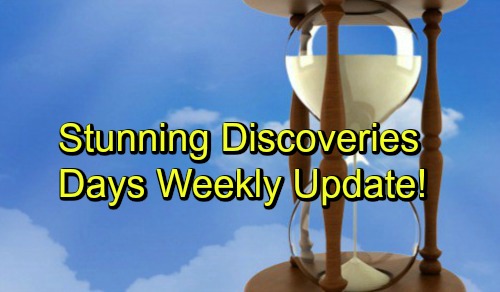 Days of Our Lives (DOOL) spoilers for the week of October 1-5 tease that some big surprises are in store. First, let’s talk about Sami (Alison Sweeney) and Stefan (Tyler Christopher). Despite getting off on the wrong foot, Sami will need Stefan’s help. She’ll suspect that Kristen (Stacy Haiduk) told him all about EJ (James Scott) and his whereabouts.

With that in mind, Sami will seek an intriguing deal. She’ll hope she can rope Stefan into mutually beneficial agreement and get the info she’s seeking. Later, Sami will make a stunning discovery. She’ll ultimately realize that Hattie (Deidre Hall) has replaced her mother! Sami may threaten to blow the whistle, but John (Drake Hogestyn) and his partners in crime will quickly explain.

This plot was cooked up to ensure Marlena’s (Deidre Hall) survival, so it’s a good thing John came up with it. After completing his wedding to Hattie, John will realize his miracle has arrived. He’ll learn Marlena’s out of her coma and on the mend.

Of course, Marlena will still need time to recover in the hospital. Hattie will keep playing the part in the meantime. Days spoilers say she’ll even give Eve (Kassie DePaiva) some less than helpful advice. Meanwhile, Kristen (Stacy Haiduk) will track down Brady (Eric Martsolf) and propose something shocking. Since Brady will be feeling blue over his broken engagement, Kristen will offer an alternative.

Days of Our Lives spoilers say Kristen will want to run away with Brady. She’ll pitch her plan, but he’ll undoubtedly shut it down. Nevertheless, DOOL fans can expect some charged moments for these two. Things could take a passionate turn if this keeps up!

Speaking of passionate turns, we’ll definitely see one for Tripp (Lucas Adams) and Ciara (Victoria Konefal). Days of Our Lives spoilers state that they’ll make love, but their relationship will come with complications. Ben’s (Robert Scott Wilson) release will prove problematic, especially since Ciara will realize she was wrong. She’ll battle guilt for believing that Ben could betray her like that.

Elsewhere, Roman (Josh Taylor) and Kate (Lauren Koslow) will join forces. They’ll be on a mission to destroy Stefan, so don’t miss the scheme they come up with. Gabi (Camila Banus) will move forward with her own scheme this week. She’ll trick Chad (Billy Flynn) into thinking Abigail’s (Marci Miller) alters are back, so be prepared for more “Chabby” chaos.

Finally, Mimi (Farah Fath) will make her Days comeback. She’ll face off with Bonnie (Judi Evans) and bring a world of trouble to Salem. It sounds like some great material’s on the way. We’ll give you updates as other news comes in. Stay tuned to DOOL and don’t forget to check CDL often for the latest Days of Our Lives spoilers, updates and news.