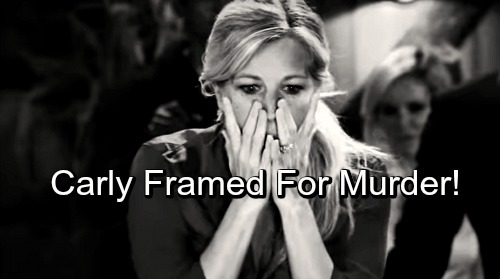 General Hospital (GH) spoilers tease that Carly (Laura Wright) will get stuck in another jam, so she’d better be prepared for trouble. November sweeps info indicates that Carly will face serious drama. She thought she was done with her Ferncliff nightmare, but maybe she’s just kicking off a brand-new chapter.

Shelly Altman, one of GH’s co-head writers, teased what’s next for Carly in the latest issue of Soap Opera Digest. “Carly finds herself embroiled in a legal situation and she struggles to keep a good head on her shoulders,” Altman said. It definitely sounds like Carly will deal with some complicated issues.

What kind of legal situation will pop up? It’s possible this is referring to Carly and Laura’s (Genie Francis) mutual mission. They’re looking into the harsh conditions at Ferncliff, so there could be a legal push for change.

However, there’s a chance Carly’s ordeal will be far worse. She has terrible luck when it comes to being framed! Nelle (Chloe Lanier) claimed Carly pushed her down the staircase at the Quartermaine mansion. That’s what led to Carly’s stint at Ferncliff and allowed her to meet Mary Pat (Patricia Bethune).

General Hospital spoilers hint that Mary Pat may die at Ryan’s evil hands. Of course, that’ll spark a mystery for the PCPD. They don’t even know Ryan’s alive, so he won’t be on their radar. The cops will form a list of suspects, so Carly may find herself on that list. After all, she’s made a fierce enemy out of Mary Pat. They’ve been sparring again and will do even more of that in the week ahead.

It seems likely that Mary Pat will clash with Carly shortly before getting herself killed. In the latest GH promo, Carly looks down and gasps at something horrifying. Here’s where things get a little tricky. General Hospital spoilers say Chase (Josh Swickard) will make a grisly discovery on November 2. So will Carly find dead Mary Pat or will Chase?

Perhaps Carly will find the bloody aftermath without a corpse in sight. Chase might come along to investigate and find Mary Pat’s body stashed somewhere. It’s easy to imagine it tumbling out of a storage closet for dramatic effect.

Whatever the case, Carly’s going to face questions. It seems she’ll be in the wrong place at the wrong time and she’s got an awful history with the victim. Ryan could even set Carly up to take the fall if he feels like it! Will Carly once again face a fierce battle? Will she fight to prove her innocence?

General Hospital viewers will want to check out all the looming bombshells. We’ll give you updates as other GH news comes in. Stay tuned to the ABC soap and don’t forget to check CDL often for the latest General Hospital spoilers, updates and news.