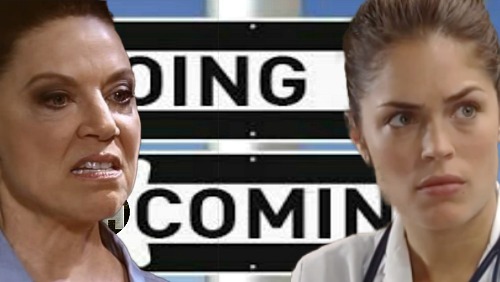 General Hospital (GH) spoilers tease that we’ve got some comings and goings news to pass along. For starters, let’s talk about Margaux’s (Elizabeth Hendrickson) mom. Ely Pouget just debuted as Jeanette Marino and there’s a good chance her GH stint isn’t over. After fooling Jeanette, Sam (Kelly Monaco) and Spinelli (Bradford Anderson) made off with her old love letters from Scully.

Some shocking info is contained in these notes, so Jeanette may come back into play eventually. That’s especially true if she realizes the letters are missing! Jeanette might put the clues together and realize those insurance company reps weren’t who they claimed to be. Spinelli and Sam were pretty convincing, but there’s always going to be trouble when you steal evidence from somebody’s home.

Plus, Margaux needs to share some scenes with Jeanette. Since Jeanette has known about Vincent’s death for years, that’s something they should obviously address. Margaux spent years believing her dad could still be out there somewhere. Was thinking he abandoned her better than thinking he was dead?

Of course, maybe it doesn’t matter since Scully’s most likely Margaux’s true father. That’s another bomb just waiting to detonate, so stay tuned for more drama. In the meantime, we should discuss a big return. Kelly Thiebaud (Britt) will make her General Hospital comeback starting Monday, October 29. Britt will get an offer she can’t refuse from Anna (Finola Hughes), so this may involve her freedom.

Will Britt help Anna capture her mom in exchange for a life on the outside? Britt may be sick of life behind bars, so Liesl Obrecht (Kathleen Gati) had better watch out! Anna will hope Britt can serve as the perfect bait in her sneaky plan.

Other General Hospital spoilers say Mary Pat (Patricia Bethune) will be back on the scene. She popped up on Friday, but there’s much more to come. Mary Pat knows Kevin (Jon Lindstrom) looks just like Ryan (Jon Lindstrom), but she’s not privy to the switch. She’ll play games with “Dr. Collins,” which means she’s bound to lose. Word has it Mary Pat will bite the dust before the week wraps up.