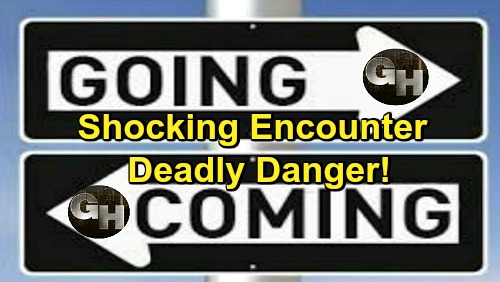 General Hospital (GH) spoilers reveal that we’ve got some comings and goings news to share. First, let’s talk about some returns. Chris Van Etten recently popped back up as Chet Driscoll. GH fans will recall that Chet is Amy’s (Risa Dorken) brother, but he’s formed a friendship with Maxie (Kirsten Storms) as well. They shared some nice moments as they chatted about Chet’s calendar shoot and the toy drive.

Maxie was thrilled to catch up, but could there be another reason for Chet’s comeback? This is certainly out of the blue, so it’s possible General Hospital will include Chet in an actual storyline. Since Ryan’s (Jon Lindstrom) probably cooking up more murders, there are concerns about Amy’s safety. She works at GH and could easily stumble across Ryan’s secret.

Of course, Amy herself hasn’t been on screen in a while. If General Hospital intends to take a deadly route with her, they really need to get her back in the action. Viewers will care more if they remember Amy exists and can see her interacting with people. Regardless, Ryan’s reign of terror is far from over. He’s got sneaky plans that’ll bring more danger to Port Charles.

Other General Hospital spoilers say Chloe Lanier will reprise her role as Nelle this week. Look for Nelle to appear in scenes with Liesl Obrecht (Kathleen Gati) at Pentonville. Their conversation will bring a confession about the baby switch and an emotional plea. Nelle will realize her secret is in scheming Liesl’s hands, so she obviously won’t feel good about the situation!

GH also has an intriguing debut coming up. John Patrick Jordan will make his first appearance as Peyton Mills on December 27. General Hospital spoilers indicate that Peyton is TV producer and it sounds like he’ll be a pushy one. Peyton will be looking for a hot scoop and that could put him at odds with serial killer Ryan.

It turns out Ryan and Peyton will have a shocking encounter. Ryan likes the chaos his behavior causes as well as the Kevin (Jon Lindstrom) show that dupes Port Charles. However, he’s particular about how his actions are represented in the media. If Peyton asks for “Kevin” for a comment and doesn’t highlight the murderer’s brilliance, there could be trouble.

Finally, there’s one departure to talk about. Spencer (Nicholas Bechtel) has wrapped his latest stint, but don’t worry. He’ll be back! General Hospital spoilers say Spencer will return to handle unfinished business down the road, so he’s left us with something to look forward to.