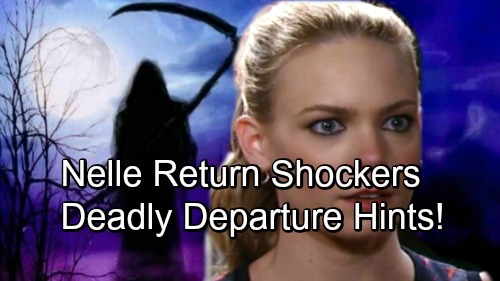 General Hospital (GH) spoilers reveal that we’ve got some comings and goings news to pass along. For starters, let’s talk about Nelle’s (Chloe Lanier) return. She’ll pop back up for some new scenes this week, so GH fans will get a chance to see how she’s doing. Nelle’s been behind bars, but she’s undoubtedly hoping that’ll change in the near future.

In a new issue of Soap Opera Digest, Lanier talked about getting back in the game after a couple months away. She was anxious to reprise the role and explore some Nelle mischief again. Lanier admitted, “I was totally curious to find out what I’d be doing, even though, obviously, Nelle’s in jail, so I knew my wardrobe options were probably limited!”

It turns out Lanier didn’t mind the wardrobe situation too much. She actually liked donning Nelle’s prison garb for her upcoming stint. “It was a lot of fun – and I loved wearing that orange jumpsuit!” Lanier exclaimed. She also suggested that Nelle’s has some unfinished business to take care of.

Lanier hinted that Nelle may get an opportunity to see “Wiley” aka Jonah during her brief visit. It sounds like some fantastic drama’s coming up, so stay tuned for more Nelle mayhem. In the meantime, we can look forward to Nicholas Bechtel’s return as Spencer. It looks like he’ll miss his grandmother soon, so it won’t be long until Spencer heads back to Port Charles.

General Hospital spoilers say Spencer will check in with Laura (Genie Francis) and grow suspicious of “Kevin” aka Ryan (Jon Lindstrom). It should be interesting to see how much he figures out. In other GH news, it looks like Hayley Erin’s preparing for her final bow as Kiki. Word has it the show may kill Kiki off.

There’s no confirmation just yet, but a SOD blind item suggests one soap has deadly plans for a likable character. Kiki could certainly fit the bill. Another blind item points to a returning soap hunk, which might be Robert Palmer Watkins as Dillon. If Kiki has a memorial service coming up, Dillon should really be around for it.