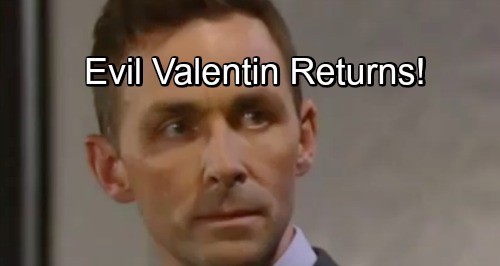 General Hospital (GH) spoilers tease that Valentin’s (James Patrick Stuart) plan will go horribly wrong. He started his Sasha (Sofia Mattsson) scheme with two goals in mind. The first one was to give Nina (Michelle Stafford) the child she always wished for. The second one was to win back his love.

Unfortunately, the whole plot’s sure to go up in smoke. Sasha refuses to leave Port Charles, so she’s playing with fire. She thinks everything’s under control, but she’s bound to get sloppy sooner or later. It probably won’t be long until Nina suspects something’s up.

That’s especially true now that Sasha’s going to be working for Nina. She admitted the job market in PC was tougher than she anticipated. Nina’s thrilled to have Sasha joining her at Crimson, but that could lead to trouble. It’ll just put Sasha in Nina’s orbit even more often, so Valentin will be terrified.

The closer Sasha gets to Nina, the easier it’ll be for cracks in the scheme to surface. Outside forces could have a hand in that, too. Sasha has the hots for Griffin (Matt Cohen), which is already making waves with Kiki (Hayley Erin). Ava (Maura West) will remain involved in that drama, too. This mess could play a role in bringing the truth to light.

Regardless, Valentin may not be able to overcome this blow to his relationship. His reunion dreams will likely be shattered, so what’s next for this General Hospital character? Perhaps it’s time for Valentin to embrace his dark roots again. He’s supposed to be a true force to be reckoned with, but GH doesn’t let him show off his power much.

Nina keeps Valentin fairly soft, but that could change once she’s out of the picture. If Valentin realizes there’s truly no hope for a future with Nina, what will he do? Will he lose the will to be a decent man?

Valentin will still have bullying Charlotte (Scarlett Fernandez) to think about, but he may feel like he can shield her from the path he chooses. He may justify his dark descent and become the real villain he was meant to be. It sounds like this could be a new beginning and that’s not always a good thing!