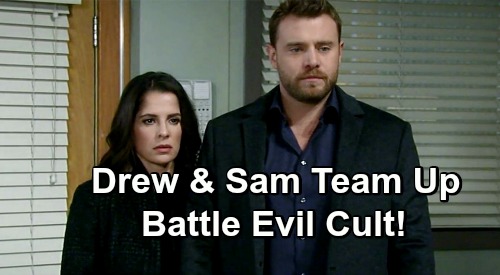 General Hospital (GH) spoilers tease that Sam (Kelly Monaco) will remain uneasy about the obituary she received and all the questions surrounding it. The Leland Powell drama serves as a reminder of a past Sam would like to forget. She’s built a better life for herself in Port Charles, but her con artist history will continue to haunt her.

Jason (Steve Burton) will console Sam as she frets next week, but he can’t stop the trouble ahead. General Hospital spoilers say Sam will get a disturbing message on December 20. It’ll undoubtedly be something else that stirs up difficult memories. Of course, this is also tied to the cult drama since Daisy (Kelsey Wang) was spotted with that newspaper at Turning Woods.

GH is doing a nice job of establishing some connections and weaving them together. We can’t forget that Oscar (Garren Stitt) and Kristina (Lexi Ainsworth) were both roped into this cult. Although Kristina has been following Daisy’s teachings a bit more, Oscar will rev up his efforts soon enough.

On December 21, General Hospital spoilers say Oscar will be on a mission. He’ll want to give back in some way and truly make a difference in the world. Oscar’s got a fighting chance thanks to his clinical trial. He hasn’t had high hopes thus far, but that could change if his condition starts improving. A hopeful outlook could be just what Oscar needs to stir his interest in helping the community.

Daisy may even visit Oscar again and give him a pep talk. She’s got this whole motivational speaking thing down pat, which isn’t surprising since she’s apparently a cult recruiter. As Oscar embraces the DOD teachings more and more, Drew (Billy Miller) and Kim (Tamara Braun) could grow concerned. Daisy didn’t make a great first impression on them anyway with holistic healing message.

Meanwhile, Sam will fret over Kristina getting sucked in this as well. It won’t be long until Sam discovers Kristina’s friends are brainwashed weirdos. She’ll worry about her sister getting pulled into danger, which will somehow link to Sam’s past. Since Drew will also worry about Oscar, this could lead him to team up with his ex.

In other words, Drew and Sam may join forces to help two vulnerable people they care about. Will love bloom again or will they just deepen their friendship? Will Sam and Drew emerge as the real heroes of this story? We’ll give you updates as other GH details emerge. Stay tuned to the ABC soap and don’t forget to check CDL often for the latest General Hospital spoilers, updates and news.