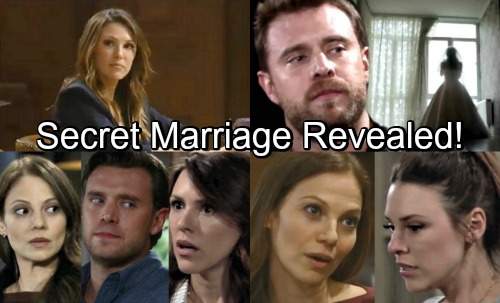 General Hospital (GH) spoilers tease that when Drew Cain (Billy Miller) starts regaining his memories, he’ll inevitably remember some things he’d rather not know. Some of those unwanted memories would be obvious. For example, Drew should have some fearful ones from his childhood. He’ll undoubtedly recall cruel Jim Harvey (Greg Evigan), his painful staircase tumble and being sent away from his home.

Franco Baldwin (Roger Howarth) will warn Drew to be careful what he wishes for. Drew’s begging for trouble, but he’ll still want to move forward with his plan. He’ll think he can handle whatever’s headed his way. However, Drew may not be prepared for the revelations from his adulthood. Perhaps he wasn’t the great guy Kim Nero (Tamara Braun) has built him up to be!

General Hospital spoilers hint that Drew’s world could be turned upside down. He’ll inevitably discover some facts he wants to keep quiet. Could one of Drew’s new secrets involve a marriage? Maybe his romance with Kim was actually an affair. If that’s the case, GH will need to introduce Drew’s mystery wife. As soapy luck would have it, she just might be in Port Charles right now.

Elizabeth Hendrickson will debut as Margaux on Tuesday, May 29. She’s the new district attorney in Port Charles, but GH fans can expect more connections to be exposed later. There’s buzz floating around about Margaux being Kim’s sister. That would certainly shake things up, especially if Margaux used to be married to Drew.

Hendrickson and Braun could easily pass for sisters, so it’d be a fun twist in this storyline. Even if Margaux just turns out to be an old gal pal of Kim’s, trouble could be brewing. These two are bound to even up fighting over Drew eventually.

Thanks to screentest info and a leaked script, it’s pretty much guaranteed that Drew and Margaux will share scenes. They could actually be sharing a whole lot of them! Miller and Hendrickson once played a popular couple on The Young and the Restless. Y&R watchers went wild for their pairing, so GH viewers might as well. At least that’s what General Hospital’s probably hoping!

It looks like Margaux will have a few secrets of her own. Will her backstory involve a marriage to Drew? Did Drew cheat with Kim and how will that affect this potential triangle? Sam Cain (Kelly Monaco) could even make it a quadrangle if she decides wants Drew back after all.

Love’s always complicated in Port Charles! We’ll give you updates as other GH news comes in. Stick with the ABC soap and don’t forget to check CDL often for the latest General Hospital spoilers, updates and news.