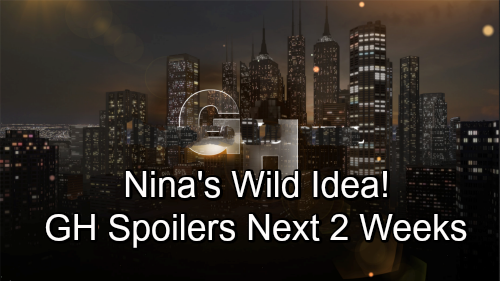 General Hospital (GH) spoilers tease that the next two weeks will bring some ups and downs in Port Charles. The week of September 3-7 will deliver joy to Brad (Parry Shen) and Lucas (Parry Shen). They’ll find out that they get to keep “Wiley,” which is because of Julian (William deVry). He pulled some strings to make sure the birth mom changed her mind.

Brad will show his gratitude by scoring Julian an invite to the adoption celebration. The judge will rule in Lucas and Brad’s favor, so they’ll certainly be thrilled about that. However, Brad will remain worried about Michael (Chad Duell). He’ll know he has to keep the truth out of the real father’s hands.

Over with Kim (Tamara Braun), she’ll be terrified about Oscar’s (Garren Stitt) health. Kim will also reveal an awful secret, which could have something to do with her son’s condition. Drew (Billy Miller) will try to be there for both Kim and Oscar during this total nightmare. Likewise, Josslyn (Eden McCoy) will rush to Oscar’s side and show her support.

Other General Hospital spoilers state that Nina (Michelle Stafford) will open up to Maxie (Kirsten Storms). She’ll probably be feeling upset about her divorce. Nina has decided she’s done with Valentin (James Patrick Stuart), but she obviously still loves him. Cutting ties is certainly going to be difficult.

Nina will also have a wild idea on this week’s new GH episodes, September 3-7, so what’s that all about? It’s likely too soon for Nina to find out about Valentin’s search for her daughter. However, Nina could come up with a strategy to get some answers. She can tell something’s up with Curtis (Donnell Turner) and Valentin. Nina will inevitably investigate and hopefully gain some insight.

During the week of September 10-14, Drew will turn to Liz (Rebecca Herbst) for comfort. He might need some advice regarding Oscar’s medical issues. Drew will also have an intriguing chat with Margaux (Elizabeth Hendrickson). She’ll let her walls down slightly, so we could hear a bit more about her mysterious past.

Meanwhile, Monica’s (Leslie Charleson) plan will go awry. She’ll mean well, but she could set the stage for disaster. Will this involve Kiki (Hayley Erin) or perhaps Griffin (Matt Cohen)? Ryan (Jon Lindstrom) will be on the loose at GH, so there’s even a chance that he’ll tie in here. Poor Kevin (Jon Lindstrom) will be stuck begging for help at Ferncliff.

Elsewhere, Mike (Max Gail) will inadvertently sabotage himself. Sonny’s (Maurice Benard) been on the fence about putting Mike in a memory care facility. He knows it has to happen eventually, but he’s struggling to make that call. However, Mike’s next outburst could force Sonny to take action. He’ll definitely cause more chaos in the Corinthos home.