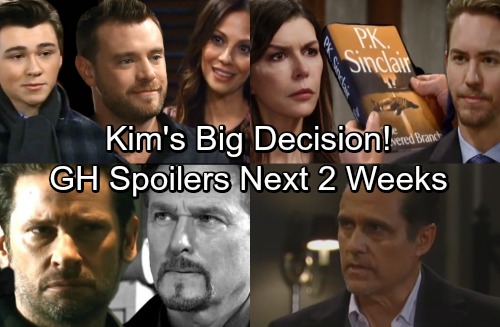 General Hospital (GH) spoilers for the next two weeks tease that fears will grow in Port Charles. The week of April 9-13 will bring an encounter that Drew’s (Billy Miller) not quite prepared for. It sounds like Drew will rush to find Franco (Roger Howarth) and realize he’s on the verge of pumping a bullet in Jim Harvey (Greg Evigan). Drew will try to think fast and gain control of this perilous situation.

Fortunately, it seems Franco will come to his senses. He’ll still loathe Jim, but at least he’ll have some peace soon enough. Confronting Jim about the past will help Franco get some closure. Liz (Rebecca Herbst) will support Franco as he deals with the aftermath of the revelations. She’ll want him to know that she’ll be there for him every step of the way.

Elsewhere, Finn (Michael Easton) will face an unexpected interruption. He might be in the middle of a date with Alexis (Nancy Lee Grahn) when Anna (Finola Hughes) walks in. General Hospital spoilers say Anna will try to avoid questions this week, so she may run along and leave the new lovebirds alone.

Anna certainly wishes she could be by Finn’s side, but she thinks her chance has passed her by. It may be a while before Anna and Finn get on the same page. Across town, Sonny (Maurice Benard) will have major concerns about his dark history. He’ll worry about Mike (Max Gail) spilling something about the field in Croton. According to Sonny, it’s a memory that Mike shouldn’t have.

General Hospital spoilers say Sonny will get a bit pushy, so he’ll probably press Mike for answers about what he remembers and how he remembers it. GH fans can expect Sonny to cross the line, so Mike will have another meltdown. The Corinthos family is certainly facing some heartbreak right now.

The week of April 16-20 will deliver even more drama for Sonny. Detective Chase (Josh Swickard) will find this mob boss and make some potentially threatening comments. It’s clear that Chase wants to uphold the law and he’s definitely not afraid of Sonny. Chase could prove dangerous now that Mike’s got crucial knowledge and loose lips.

Meanwhile, Kim (Tamara Braun) will reveal her true intentions. Will she tell Julian (William deVry) she’s going to go for it with Drew? Kim’s been pining for him more than ever lately. Whatever the case, Kim will have some advice for Julian as well. She’ll think he needs to focus on his family, so Julian just might accept that guidance.

Over with Spinelli (Bradford Anderson), he’ll find himself in a tight spot. Naturally, Jason (Steve Burton) will help him wiggle out of it. He could also get some of the answers he’s been seeking. We’ll give you updates as other GH news comes in. Stay tuned to the ABC soap and don’t forget to check CDL often for the latest General Hospital spoilers, updates and news.