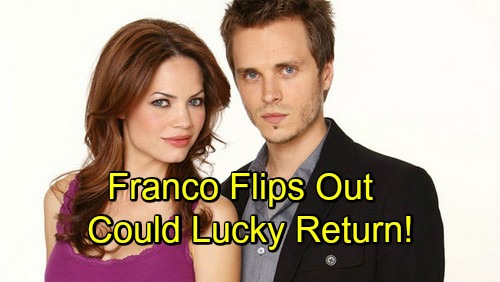 General Hospital (GH) spoilers tease that Franco’s (Roger Howarth) dark side could become a real problem. His deadly actions were the result of a tumor, so it’s doubtful GH will take Franco back into full-on villain territory. Instead, this storyline may be more about impulses, control and that whole inner struggle.

Franco’s past has always been a huge issue for him and that’s not going to change anytime soon. In fact, Franco may be forced to confront that side of himself as he considers the new murder investigation. “Kevin” aka Ryan (Jon Lindstrom) warned Franco to stay out of it and focus on his own mental health.

However, that was just an excuse to avoid Franco’s digging. He’s the one person who could actually put Ryan’s plan in jeopardy, so “Kevin’s” worries were understandable. Despite Ryan’s warning, Franco may not be able to stay out of this. That’s especially true once Ryan claims his next victim, which could easily be Kiki (Hayley Erin).

General Hospital spoilers suggest that Erin’s leaving the role and may get a grim exit. It makes sense for Ryan to kill her since he’s gotten so cozy with Ava (Maura West), who wants revenge. If that’s how this plays out, Franco will inevitably step up to avenge Kiki’s death. That could bring some serious marital woes.

Liz loves Franco with all her heart, but she’ll hate to see him reverting to a dark place. Kiki’s potential death could stir up things and take Franco somewhere Liz doesn’t want him to go. General Hospital keeps dragging their feet on this “Friz” marriage, so maybe they have a split in mind. Liz and Franco have been together for a while now, so it wouldn’t be a bad idea to shake it up.

After all, there are several other love interest options on canvas. Franco’s raging, vengeful desires could drive Liz down a different romantic path. Lucky (Jonathan Jackson) was mentioned recently, so a recast might pop up and win Liz back eventually. Then again, Liz could find herself with Drew (Billy Miller) or Griffin (Matt Cohen). Jason (Steve Burton) might even be an option if “JaSam” ends up fizzling.

Bottom line, “Friz” may not be solid. If Franco goes too far, he may lose what he loves most. We’ll give you updates as other GH news comes in. Stick with the ABC soap and don’t forget to check CDL often for the latest General Hospital spoilers, updates and news.