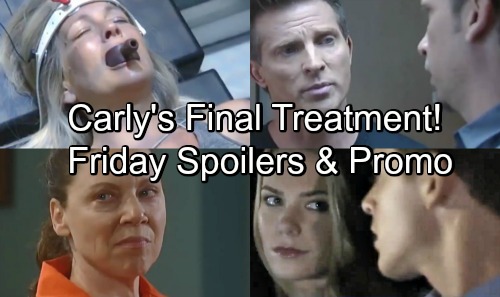 General Hospital (GH) spoilers for Friday, July 27, tease that Nina (Michelle Stafford) will get grilled. Peter (Wes Ramsey) lied about Liesl (Kathleen Gati) acting alone, so Nina’s off the hook. She’ll just have to back up Peter’s story about showing up in the right place at the right time. However, Nina won’t be in the clear with Maxie (Kirsten Storms). Since Maxie knows the real story, she’s going to want answers.

At the police station, Maxie will try to understand. She’ll ask how Nina could let Liesl rope her into kidnapping Peter. Nina will be apologetic about her role in all this. She’ll assure Maxie that she never meant for things to get so out of hand.

Nearby, General Hospital spoilers say Robert (Tristan Rogers) will taunt Liesl. He’ll suggest that she’s all cuffed and ready for prison. Liesl will glare at Robert as she sits in an orange jumpsuit. She certainly won’t be amused by all the gloating.

At GH, Peter will still be stuck in his hospital bed. When Finn (Michael Easton) drops in, they’ll have a tense conversation about their pasts. Peter will wonder if Finn has any dark skeletons stuffed in his family’s closet. That could be a huge hint about some upcoming drama for Finn, Chase (Josh Swickard) and their father.

In the elevator, Jason (Steve Burton) will want the scoop from Franco (Roger Howarth). He overheard Franco telling Liz (Rebecca Herbst) about his art therapy grant. Franco suggested that grant or no grant, he couldn’t help those poor souls at Ferncliff.

Of course, Carly (Laura Wright) is one of those poor souls! That’s why Jason will push Franco to tell him all about his new position. Jason will hope he can somehow use Franco to his advantage. Since Franco has access to the facility, this could be Jason’s way inside.

Meanwhile, Carly will be strapped to a table. Dr. Lasaris (Casey Biggs) has devised some new version of electroconvulsive therapy. It sounds like it’s even harsher than the typical form. Carly will freak as the doc cranks up the machine, but Jason will there soon enough. Thanks to GH’s weekly promo, we know Jason will pull a gun on Mary Pat (Patricia Bethune) and an orderly.

In Michael’s (Chad Duell) car, he’ll suggest that he’d do anything for Nelle. Michael will do his best to butter Nelle up and pry a confession out of her. A camera’s been installed in the vehicle, so Chase (Josh Swickard) hopes Nelle will admit she set up Carly. That way they can get the conviction overturned.

Nelle may not give Michael what he wants, which could certainly frustrate him. General Hospital spoilers say they’ll end up arguing in the car. In the midst of their confrontation, another vehicle will veer into their lane. Michael won’t be able to avoid a sudden crash.

The people in the other car will be familiar to GH viewers, so that’ll add to the mayhem. We’ll give you updates as other GH news comes in. Stay tuned to the ABC soap and don’t forget to check CDL often for the latest General Hospital spoilers, updates and news.