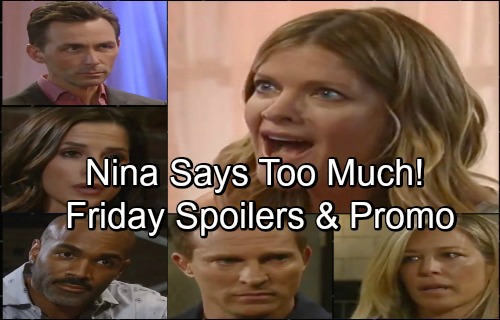 General Hospital (GH) spoilers for Friday, June 22, tease that Julian (William deVry) and Alexis (Nancy Lee Grahn) will face some conflict. Their therapy session will get underway, but it’ll be even worse than they feared. It won’t take long for the tension to explode, so Julian will suggest calling the whole thing off.

Fortunately, Kevin (Jon Lindstrom) will undoubtedly step in and settle them down. He’ll encourage Alexis and Julian to share their views peacefully. It’s fine to express pain and anger, but they need to use the proper strategies. Blasting each other isn’t the best plan if they want to heal and move on.

Meanwhile, Lucas (Ryan Carnes) will be honest about his fears. He’ll tell Brad (Parry Shen) he’s worried about the birth mom changing her mind. She’ll have 30 days to take her baby back, so that could spell trouble. Brad and Lucas will certainly bond with their new little one during that time.

What happens if the kid suddenly gets ripped away? Lucas won’t know how they could get through something like that. Nevertheless, Brad may push Lucas to stay positive. He’ll hope that the rest of this adoption will go smoothly, but something tells us it won’t!

Other General Hospital spoilers say Curtis (Donnell Turner) and Sam (Kelly Monaco) will be stumped. They believe Peter (Wes Ramsey) may be in Port Charles, but they have no idea where. Sam will feel confident that Valentin (James Patrick Stuart) knows more than he’s letting on. However, that doesn’t seem to be the case. In a moment alone, Valentin wondered aloud about Peter’s location.

Of course, Valentin should learn more soon enough. He created a romantic Morocco scene in Nina’s (Michelle Stafford) office, but she won’t appreciate it. In fact, it’ll only spark a fierce outburst. As Nina rants, she may tip Valentin off to her scheme with Liesl (Kathleen Gati). Nina will insist that because of Valentin, she had to take justice into her own hands.

Will Valentin realize Nina’s involved in Peter’s disappearance? Will he do something about it? Valentin should be in a tight spot. He’s always tried to help Peter, but rescuing him could infuriate Nina once again. At Charlie’s Pub, Sonny (Maurice Benard) will have a run-in with Margaux (Elizabeth Hendrickson). He won’t hesitate to rip into her for Carly’s (Laura Wright) predicament.

Sonny will blame Margaux for getting Carly sent to harsh Ferncliff instead of cozy Shadybrook. He may toss around some veiled threats, but Margaux will stay cool as a cucumber. She’s not the kind of gal who gets spooked by Sonny or anyone else.

Later, GH spoilers say Mike (Max Gail) will start to fall apart. When Sonny tries to help his father, Mike will lash out at him. He’ll yell that he’s not an invalid, so it seems Mike’s really struggling. Although Mike understands what he’s up against, it’s still difficult to lose his independence.

At Ferncliff, Carly will have an emotional chat with Jason (Steve Burton). She’ll note that she can’t make it in there without him. Sadly, Carly will have to find a way after Jason’s exposure on next week’s new GH episodes, June 25-29! We’ll give you updates as other General Hospital news comes in. Stick with ABC’s GH and don’t forget to check CDL often for the latest General Hospital spoilers, updates and news.