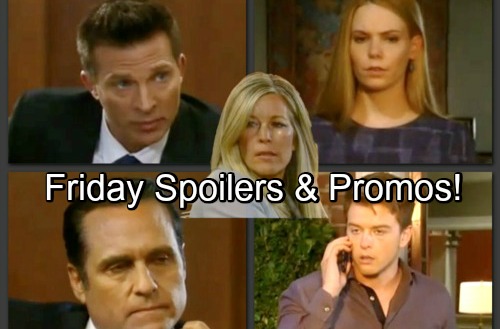 General Hospital (GH) spoilers for Friday, June 8, tease that Anna (Finola Hughes) will fret over Robin’s (Kimberly McCullough) crushing reaction to her news. She’ll open up to Finn (Michael Easton) about the pain she saw in her daughter’s eyes. After Anna came clean about Peter (Wes Ramsey), Robin suggested that she needed time to process all this. That was to be expected, but Anna will still worry.

As a concerned Finn looks on, Anna will talk about her broken bond with Robin. She’ll state that something between them has been irrevocably lost. Of course, Finn won’t see it that way. He’ll think Anna just needs to give Robin some space and keep hope alive. Anna knows Robin has a good heart. She just has to trust that it’s possible to move forward with forgiveness.

General Hospital spoilers say Finn and Anna will make love pretty soon. Whether it happens now or within the next few episodes, these two will definitely connect on a deeper level. Meanwhile, Jordan (Vinessa Antoine) will fume about work. Her position could be in jeopardy, but she’s going to put up a fight. Curtis (Donnell Turner) will listen as Jordan insists she’s not losing her job over Peter August.

At GH, Alexis (Nancy Lee Grahn) will drop by Monica’s (Patty McCormack) office. She’ll note that she’s representing Kiki (Haley Erin), who intends to go public with her sexual harassment allegations. Kiki has to leave Dr. Bensch’s (James DePaiva) name out of it, but she can at least cause a stir over the hospital’s policies. Getting the people of Port Charles riled up might help her case.

Monica had better buckle up and get ready for backlash. There’ll undoubtedly be some skeptics out there, but there’ll be plenty of PC residents on Kiki’s side as well. Across town, Michael (Chad Duell) will make another phone call about Nelle (Chloe Lanier). It sounds like he’ll get Spinelli (Bradford Anderson) on the line again and point out that Nelle just buried Carly (Laura Wright) in court.

Nelle will sneak up behind Michael and ask what he’s doing. She’ll be a bit suspicious, but Michael will manage to hide his devious plan. Nelle tends to see what she wants to see when it comes to her “baby daddy.” Her suspicions should die down, especially if Michael ups the ante. Perhaps it’s time to suggest a romantic reunion – or at least fib that they’re inching in that direction.

In the courtroom, General Hospital spoilers say Diane (Carolyn Hennesy) will question Sonny (Maurice Benard) on the stand. She’ll get him to admit that he fears for his wife. Diane will really play up Carly’s fragile mental state, so she’ll undo some of Margaux’s (Elizabeth Hendrickson) brutal damage.

Before Jason’s (Steve Burton) turn, he’ll whisper to Carly (Laura Wright). Jason will insist that she can stop this right now if she wants to. He hates all the lies, but Carly will convince him to stick to the plan. This is Carly’s only shot at avoiding prison, so Jason will try to back Carly up.

Carly will wind up in Ferncliff at the end of this mess. The next nightmare will come once she’s in the nuthouse! We’ll give you updates as other GH details emerge. Stay tuned to the ABC soap and don’t forget to check CDL often for the latest General Hospital spoilers, updates and news.