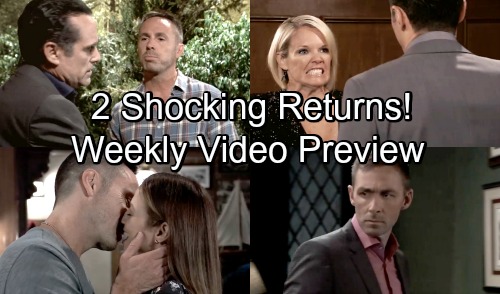 First, Ava (Maura West) and Griffin’s (Matt Cohen) spat over Griffin’s one-night stand with Kiki (Haley Erin) is going to get ugly. Ava isn’t someone to be messed with, and she was deeply hurt and humiliated in open court by the revelation about Griffin and Kiki’s night together.

Unfortunately for Griffin, Ava’s rage over his indiscretion will intensify. The promo shows a full-blown Ava melt-down over Griffin’s unforgivable betrayal. Griffin had better watch out, as Ava promised that he would be very sorry for what he had done.

The conflict continues with Sonny (Maurice Benard) and Julian (William deVry), who are seen arguing. This likely has to do with Sonny’s continued interest in buying out Julian’s pub, and Julian’s steadfast refusal of the offer. Sonny wants desperately to halt Julian’s planned renovations to the pub, as it may unearth a body and a gun that will incriminate Sonny if found.

And what about the jaw-dropping character returns? One is likely Cassandra (Jessica Tuck), who was revealed to Anna (Finola Hughes) and Finn (Michael Easton) as the mystery patient that Finn is supposed to cure. Cassandra was last seen on-screen in January, when Valentin (James Patrick Stuart) found her hospital room empty and learned that she’d been moved to a WSB medical facility.

Now an unknown person or entity has captured Anna and Finn in order to bring Cassandra out of her coma. It certainly looks like Finn will be successful in that endeavor. Cassandra will likely bring intrigue and trouble for Valentin, as it seems that she’s got something on him. Viewers will remember that Cassandra has pressured Valentin into helping her in the past, reminding him that he “had no choice.”

As far at the other character return, it could be Kristina (Lexi Ainsworth), who will be returning to reunite with Alexis (Nancy Lee Grahn), but Nelle (Chloe Lanier) would certainly be the more jaw-dropping option!

GH buzz is that Nelle may return for a final chaos-inducing appearance at baby Jonah’s funeral. Michael (Chad Duell) and Carly (Laura Wright) will plan Jonah’s funeral, never expecting that the judge may allow Nelle to attend.

It looks like the drama is heating up in Port Charles! We’ll give you updates as other news comes in. Stay tuned to the ABC soap and don’t forget to check CDL often for the latest General Hospital spoilers, updates, and news.