General Hospital Spoilers: JaSam Together, Maybe or Maybe NOT – See Why Sam and Jason Face A Huge Problem 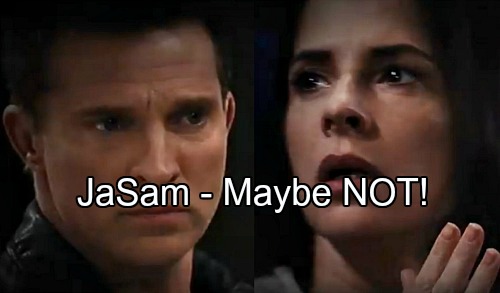 General Hospital (GH) spoilers tease that Sam McCall (Kelly Monaco) may be very impressed with the family man glimpses she’s gotten of Jason Morgan (Steve Burton) lately, but that may change in the future. Solid GH spoilers tease that Sonny Corinthos (Maurice Benard) may return to mob activity and incite a mob war with Julian Jerome (William DeVry) – over the body hidden under Charlie’s Pub, and Sonny has even discussed Jason carrying out a hit on Julian.

Sam got used to Drew Cain’s (Billy Miller) version of Jason when he and everyone else thought he was Jason. Drew may have not retained his own memories, but he did retain enough of his own personality for him to display major differences.

He would help Sonny and Carly (Laura Wright) and others out when they were in danger, but he turned down Sonny when he asked him to return to “his” former job of enforcer, also known as hit man! Drew, even as Jason preferred family life.

A few episodes back during a conversation with Drew, Sam seemed rather wistful as she told him she had loved the time that they had when they were a couple. She may have missed the family life and times they had together. At this point in time she remains friends and co-parent with both Jason and Drew, but not romantically entangled with either one.

General Hospital recently put out a “Best Of Jason and Sam’, reliving their romance, and most GH fans assumed it was because it was planned for Jason and Sam, also known as “Jasam” to renew their romance. But it may be that it turns out to be more of a REMEMBERANCE series than a spoiler of something yet to come!

No doubt Sam remembers all those fun times from she and Jason’s past, and the excitement and romance. But, Jason is Jason and he eschewed family life since after his traumatic brain injury – caused by his late brother AJ (Sean Kanan) driving drunk into a tree, when Jason tried to stop him.

Sure, he thinks of Michael (Chad Duell) as a son, and indeed did help to raise him. But the attachment to Michael is through his mother Carly because AJ was Michael’s natural father so Jason is his uncle.

Sam may have gone into denial after Jason “died” and blocked out any memories of danger from Jason’s lifestyle that affected either her or Jason. She now has Danny and Scout’s safety to consider.

Make no mistake about it – Jason’s family is Sonny and Carly, and he still puts them ahead of any natural family or relationship he may have. Carly especially is always first, and he is still at Sonny’s beck and call if Sonny restarts mob activity.

That is bound to put a wedge between Sam and Jason, and would likely snuff out any spark renewing itself between them when Sam realizes Jason hasn’t changed in that respect. Keep watching GH and checking CDL General Hospital spoilers frequently to see what happens down the road with Jason and Sam.