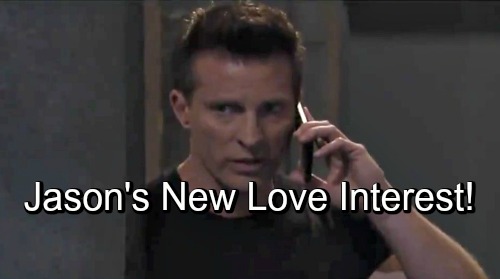 General Hospital (GH) spoilers tease that Jason (Steve Burton) may need a new love interest. He clearly loves Sam (Kelly Monaco) and wants her in his life any way he can get her. Jason would be thrilled over a real reunion, but Sam’s been hesitant to take the plunge.

There’s a chance this ordeal with Oscar (Garren Stitt) could make her see things in a different light. Sam could eventually decide to go after what she wants and give Jason the happiness he’s seeking. However, it’s also possible nothing will change.

Even if Jason and Sam move forward as a couple, there’s no guarantee they can recapture the magic. Maybe they’ve both been chasing some impossible dream. “JaSam” fans would love to see this pairing back together, but GH hasn’t been eager to make it happen. Perhaps it’s time to shift gears and give Jason a shot at another romance.

There are certainly some good options around town. Next week, General Hospital spoilers say Ava (Maura West) will seek support from Jason. It’s weird that GH is suddenly putting her back in Jason’s orbit. It’s even weirder that Ava’s turning to him for support! Perhaps there’s a reason for this odd plot point.

After Ava helped Jason escape from the clinic in Russia, General Hospital laid the groundwork for a friendship. Jason turned against Ava after the Morgan (Bryan Craig) details came out, but maybe there’s still hope for them. They could become pals again and build toward a romance that would infuriate Carly (Laura Wright).

Then again, GH might want to create some friction between Sonny (Maurice Benard) and Jason. Maybe Jason could grow closer to Margaux (Elizabeth Hendrickson) and try to stop Sonny’s takedown. If he falls for the enemy in the process, that’d be an interesting scenario.

Jason and Margaux might have some sizzling chemistry! It’d be fun to see Margaux go for a bad boy since she’s so focused on justice. Nevertheless, there’s another option that would keep the Jason, Carly and Sonny unit intact. General Hospital may not want to break up their usual love fest!

In that case, they could add to the conflict between Jason and Drew (Billy Miller). Jason shared some nice moments with Kim (Tamara Braun) recently. He really came through for her by getting Oscar (Garren Stitt) to the hospital ASAP. Could Kim and Jason become the next big thing?

Kim has a history with Drew, but we can’t forget that he looks totally different now. Jason still looks like the love Kim lost. In fact, Kim recently mentioned that Drew was more like a kind stranger. He doesn’t remember their past together, so it’d be just as easy for Kim to fall for Jason.

Should Jason forget about winning Sam back and focus on someone new? Which of these three love interests would be the best pick? We’ll give you updates as other GH news comes in. Stay tuned to the ABC soap and be sure to check CDL often for the latest General Hospital spoilers, updates and news.