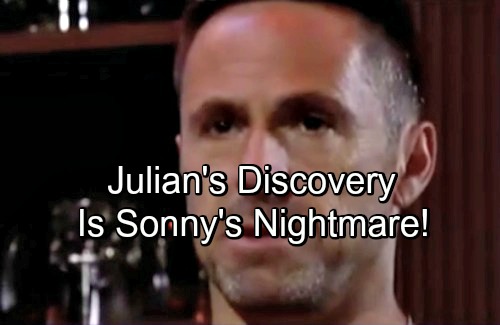 General Hospital (GH) spoilers tease that Sonny Corinthos (Maurice Benard) will get an alarming visit from Julian Jerome (William DeVry). Of course, Sonny’s concerned about the body and incriminating weapon. Mike Corbin (Max Gail) moved them from the field in Croton and buried them again under Charlie’s Pub.

Now that Julian has pub expansion plans, Sonny naturally fears the worst. There’s a chance Julian will disturb the burial area and dig up a world of trouble for Sonny. Jason Morgan (Steve Burton) set some permit delays in motion, but those won’t stop Julian for long. As a result, Sonny will remain paranoid about this tricky situation. If things go south, Sonny could easily find himself behind bars!

General Hospital fans know Sonny has a lot on his plate right now. He’s dealing with Carly Corinthos’ (Laura Wright) Ferncliff drama as well as Michael Corinthos’ (Chad Duell) risky plan. Sonny’s worried about both of them, so he’d rather not deal with pub mayhem. Mike’s rapid decline is another reason Sonny just doesn’t need more chaos in his life.

Nevertheless, Sonny can’t stop what Mike set in motion. This long-held secret must be handled – and fast! Julian recently went through an old box and stumbled across an intriguing picture. He gazed at an old photo of Mike and Charlie Delaney, so that may give him an idea soon.

Mike tends to like blasts from the past. Sometimes they can even help with Mike’s memory troubles. Perhaps Julian will decide to hand the pic over to Sonny. He might fish for info on how Charlie and Mike knew each other, but Sonny obviously won’t share the whole truth.

There’s no guarantee the gun Sonny’s fretting about actually ties him to the crime. After all these years, any trace of DNA may be impossible to confirm as Sonny’s. The harsh elements have undoubtedly affected the buried proof.

However, Sonny can’t rule it out since technology has progressed so much. He certainly doesn’t want to leave anything to chance! Sonny may once again push Julian to sell Charlie’s Pub, so that could really raise Julian’s suspicions. He’ll inevitably wonder why Sonny’s so desperate to secure this location.

Julian won’t put it all together just yet, but he might if he unearths the corpse and gun. Whether Sonny’s DNA is on the weapon or not, Julian could hold this over him. Is a blackmail plot looming on GH? General Hospital spoilers say some we’ll definitely see some scheming, so stay tuned.

It sounds like some exciting scenes are ahead on the ABC soap. We’ll give you updates as other news comes in. Stick with GH and don’t forget to check CDL often for the latest General Hospital spoilers, updates and news.