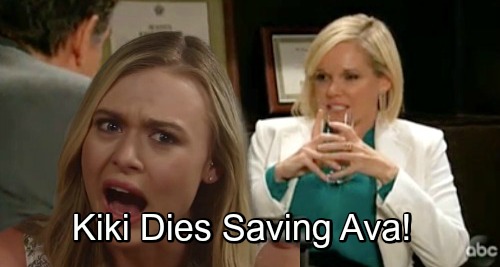 General Hospital (GH) spoilers tease that Ava (Maura West) will open her heart again. She was crushed when she found out Griffin (Matt Cohen) slept with Kiki (Hayley Erin), but she channeled her despair into rage. It wasn’t long until Ava was plotting her revenge. She managed to get Griffin suspended at GH and now it’s Kiki’s turn to face vengeful drama.

In the midst of all this, Ava’s been growing closer to “Kevin” aka Ryan (Jon Lindstrom). Now that he’s refusing to see her as a patient, Ava may see no reason they can’t get together. “Kevin” admitted he was too fascinated by Ava to give her guidance. He argued that he just couldn’t be objective, so Ava left feeling flattered and intrigued. That trend will continue as “Kevin” expresses even more interest.

Ava might have some reservations thanks to “Kevin” and Laura’s (Genie Francis) recent breakup. She probably won’t want to be a rebound, but beggars can’t be choosers. It’s not like Ava’s got a long line of men who think her sinister side’s attractive. It takes a special kind of man to fall for Ava, so her options are limited in Port Charles.

As a result, it looks like Ava will just go for it. She may think she’s got nothing to lose here. Griffin broke Ava’s heart, so she might keep some walls up this time. She may tell herself that if she doesn’t fall too hard, she can have some fun with “Kevin” and fill the void in her life.

Of course, there’s something Ava doesn’t know and it’d change everything if she did! She doesn’t realize serial killer Ryan is masquerading as his twin and wreaking havoc in PC. How will Ava ultimately learn the truth?

Next week, General Hospital spoilers say Kiki will offer Ava a warning. That could be about Ava’s attempt to stir the pot between Kiki and Sasha (Sofia Mattsson). However, there’s a chance it’ll involve Ava and “Kevin’s” relationship. Kiki may scold Ava for making her move on Laura’s man immediately after their separation.

Where could GH go with that? Ryan will probably target Kiki anyway thanks to Ava, but it’d give him even more of a motive if she’s against their romance. It could also set the stage for Kiki to dig too deep and try to expose the shocker.

Since General Hospital buzz suggests Kiki may be killed off, it’d be interesting if she died attempting to warn her mother. Ryan might murder Kiki just before she tried to blab. Although Kiki and Ava aren’t in a good place right now, Kiki would certainly intervene if she knew her mom was dating a monster.

Will Kiki make a heroic effort before her death? Will Ava ultimately learn Kiki died trying to save her and feel even worse? We’ll give you updates as other GH news comes in. Stay tuned to the ABC soap and don’t forget to check CDL often for the latest General Hospital spoilers, updates and news.