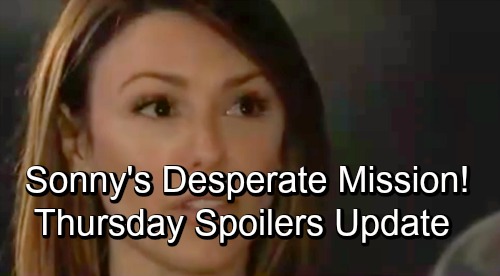 General Hospital (GH) spoilers for Thursday, November 15, reveal that Ryan (Jon Lindstrom) will pick Franco’s (Roger Howarth) brain a bit. When he runs into him at GH, Ryan will wonder why Franco thinks he can catch the killer. Franco will reflect on his own twisted history and how he can get inside this murderer’s mind. He’ll hope he can provide some valuable insight as this investigation heats up.

Speaking of that investigation, Jordan (Briana Nicole Henry) will get another break in the case. She’ll give Sonny (Maurice Benard) and Carly (Laura Wright) updates on the definitive proof the cops have uncovered. The good news is it’ll probably point away from Carly. The bad news is it probably won’t put them any close to Ryan or even Kevin (Jon Lindstrom), who Ryan’s currently impersonating.

General Hospital spoilers say Ryan will make some sneaky moves on Thursday. He’ll so whatever he can to guide Jordan down the wrong path. As for Sonny, he’ll have other business to take care of. Margaux will meet with her enemy and give him an attitude as usual. Nevertheless, Sonny will want to push past all the drama. He’ll hope he can convince Margaux to move on for both their sakes.

Across town, Liz (Rebecca Herbst) will ask Willow (Katelyn MacMullen) about Aiden (Jason David). She’ll hope Ms. Tait’s figured out the source of Aiden’s troubles. Willow may have a decent idea thanks to Charlotte’s (Scarlett Fernandez) latest round of teasing. She might mention that Aiden’s getting bullied – perhaps by other children as well. You can bet Liz will take steps to help Aiden ASAP.

In the meantime, Curtis (Donnell Turner) and Drew (Billy Miller) will head to the Metro Court bar. They’ll chug some beers as they celebrate Curtis’ upcoming wedding. Drew will offer a present to celebrate Curtis’ new life with Jordan. General Hospital spoilers say his gesture will warm Curtis’ heart and earn plenty of gratitude.

Over with Finn (Michael Easton), he’ll read an intriguing message from his ex. A letter from Hayden (Rebecca Budig) just arrived, so Finn will open it and find out what she wants to tell him. Anna (Finola Hughes) will want the scoop, too. General Hospital spoilers state that Finn will read most of the letter out loud, but he’ll skip something significant.

Of course, jittery Finn isn’t an expert at concealing things. It won’t be hard for Anna to see that he’s holding his tongue. Anna will encourage Finn to read the rest of Hayden’s note, so he’ll undoubtedly cave in. Whatever he reveals may bring sting, but Finn and Anna will do their best to get over bump in the road. For now, Anna is the only one Finn wants by his side.

It sounds like another fantastic episode’s on the way. We’ll keep you posted as other GH details emerge. Stick with the ABC soap and don’t forget to check CDL often for the latest General Hospital spoilers, updates and news.