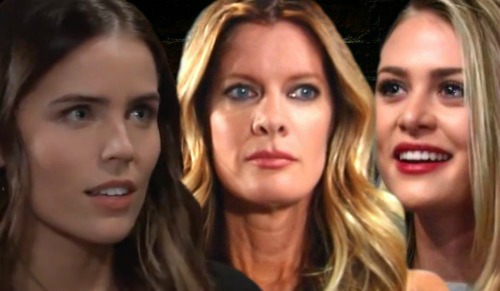 General Hospital (GH) spoilers reveal that there’s plenty of Britt (Kelly Thiebaud) and Sasha (Kelly Thiebaud) buzz floating around. Since they look so much alike and Nina’s (Michelle Stafford) DNA tests were a match for Sasha, there could be a Britt twist that comes into play. Perhaps she has a much closer link to Sasha than Nina does.

However, we can’t lose sight of the real long-lost daughter story. Assuming Madeline (Donna Mills) told the truth, Nina’s kid is still out there somewhere. Valentin (James Patrick Stuart) was trying to get a reunion in motion ASAP, so maybe he went with the easiest option he could find. He might’ve figured it’d be better than searching for years and losing Nina forever.

Besides, there was no guarantee Nina’s real daughter would’ve cooperated. With Sasha, Valentin probably thought he could control her – presumably with cash. He may have viewed this as his best shot at winning Nina back. Valentin could be the hero that set up a warm reunion and established a mother-daughter bond. Unfortunately, he didn’t count on Sasha going rogue!

Sasha is sticking around longer than anticipated, so that’s problem number one. Valentin knows it boosts the chances of getting caught. Plus, Sasha will cause more issues now that she’s living with Kiki (Hayley Erin). Sasha has her eye on Griffin (Matt Cohen), so she’ll make a move on him soon. Kiki isn’t going to be pleased, but there may be an even bigger confrontation just waiting to erupt.

Will Kiki discover what her new roommate’s hiding? Could she catch on and reveal the truth to Nina? Kiki would hate to break Nina’s heart, but she wouldn’t want Sasha to keep manipulating her. Since many GH viewers suspect Kiki is Nina’s real daughter, this would be pretty perfect. Kiki could blow the lid off the scam and later be revealed as the answer to the mystery.

Sadly, General Hospital spoilers say Erin’s leaving the role of Kiki behind. It seems likely that Kiki will be killed off, so she won’t be around to connect with Nina for long. Still, GH could play out some good drama before she goes.

Would you like to see Kiki expose her shady “sister” and claim her spot as Nina’s biological child? Will Kiki be part of derailing Sasha and Valentin’s plot? We’ll give you updates as other General Hospital news comes in. Stay tuned to ABC’s GH and don’t forget to check CDL often for the latest General Hospital spoilers, updates and news.