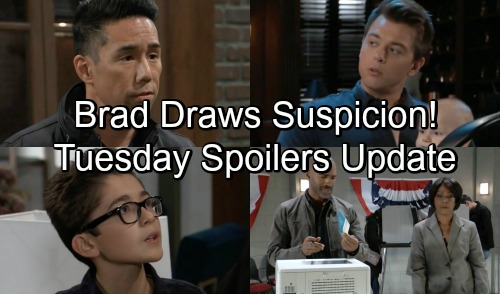 General Hospital (GH) spoilers for Tuesday, November 6, tease that Michael (Chad Duell) will share some sweet moments with “Wiley.” He’ll unknowingly connect with his son, but it appears he’ll get wrapped up in election drama, too. Michael will ask somebody if he or she’s reconsidered, so this may be about Laura (Genie Francis) nearly bailing on her write-in campaign.

Fortunately, Laura got a pep talk from Spencer (Nicholas Bechtel) and Lulu (Emme Rylan). They renewed her fight, so she’ll be in better spirits. Laura doesn’t really expect to win, but she hopes to at least light a fire under Ned (Wally Kurth). She wants to keep him on his toes and spark some change.

Little does Laura know Spencer’s been plotting! He’s apparently rigging this election, so that’s going to spell trouble. General Hospital spoilers say Charlotte (Scarlett Fernandez) will get a whiff of Spencer’s scheme on Tuesday. She’ll probably call Spencer out on it and wonder what he’ll do if the truth comes out. Charlotte may even threaten to expose Spencer’s secret herself.

However, Spencer will have another mess to deal with. Ned will approach Laura and stir up some conflict, so Spencer will resort to meddling again. He’ll step forward and insist that his grandmother shouldn’t fall for Ned’s trap. Spencer will think it’s just classic “Quartermaine chicanery,” but Laura may want to hear Ned out.

If Ned can’t uncover the election fraud, Curtis (Donnell Turner) just might. He’ll notice something peculiar at the polls, so he’ll let a worker know about it. Curtis may do a bit more digging and come up with a bombshell. At GH, Finn (Michael Easton) will give Britt (Kelly Thiebaud) some health updates. She’ll think she’s A-OK, but Finn will suggest her condition could head downhill.

Based on Finn’s facial expression, this could be his attempt at humor. Finn might follow it up with some joke that annoys Britt. Of course, it’s possible there’ll be some issue that pops up. General Hospital buzz says Britt’s story may be linked to Sasha’s (Sofia Mattsson), so this could be the setup for a shocker.

Elsewhere, Anna (Finola Hughes) will get a request for help. Jordan (Briana Nicole Henry) will be in a bind, so she’ll turn to Anna for a big favor. Over with Brad (Parry Shen), he’ll hope Julian (William deVry) can hold down the fort while he’s gone. It seems Brad will have to leave Port Charles briefly, which could be dangerous with a baby swap secret in play.

Lucas (Ryan Carnes) will be a hint suspicious of Brad and his jittery behavior. He’ll feel like Brad’s still terrified of losing “Wiley,” so he just won’t understand what’s bothering him. Across town, Chase (Josh Swickard) will spot Willow (Katelyn MacMullen) and try to make some progress. His first impression wasn’t perfect, but his second one might be exactly what Willow’s looking for.

Chase will tease Willow about being able to arrest her. He’ll show off his bold and playful side, so maybe this will lead to a date. General Hospital spoilers say Chase will keep up his efforts, so let’s hope Willow caves in. We’ll keep you posted as other GH news comes in. Stick with the ABC soap and don’t forget to check CDL often for the latest General Hospital spoilers, updates and news.