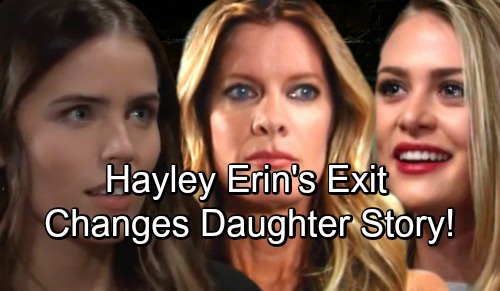 Curtis (Donnell Turner) recently found Sasha (Sofia Mattsson), but there are still some startling Kiki clues to consider. GH suddenly put Nina in Ava’s (Maura West) orbit so they could fight about the harsh treatment Kiki’s receiving. Nina argued that if Kiki were her daughter, she’d be taking advantage of every moment with her. She wouldn’t be clashing nonstop and destroying their relationship.

Of course, Ava fired back that Nina wasn’t a mother and never would be. GH could easily drop the Kiki angle and just let the Sasha story stand. They didn’t specifically spell out that Kiki would be Nina’s daughter; they just sort of raised her as a possibility. In the end, they may just use this as a way to drive home the mom point. Nina is indeed a mother to someone, so Ava’s clearly wrong.

Then again, General Hospital may follow through on this side of the story. Since Erin’s exiting, it wouldn’t make much sense for Kiki to actually be Nina’s daughter. However, the show could still explore this as they build to Kiki’s exit. Unless they recast, this could become part of Kiki’s farewell.

Let’s say some new evidence comes to light. If it suggests Kiki is Nina’s biological child, that could raise questions about the accuracy of Sasha’s DNA test results. Before the mystery gets sorted out, Ava and Kiki’s conflict could really explode. If Kiki thinks her mother’s been keeping such a huge secret, she’ll surely unleash her fury.

Later, the Nina-Kiki confusion could be revealed as a false alarm. GH might let Ava remain Kiki’s mom and perhaps even bring them back together eventually. It’d be a shame to see Kiki leave on such bad terms with Ava. It’d be even worse to see Kiki killed off while stuck in so much conflict!

There’s a chance General Hospital intended to make Kiki the missing daughter, but had to shift gears due to Erin’s looming departure. Whatever the case, Sasha is now the best option. It’s possible they’re both red herrings, but Sasha stands a better shot at sticking than Kiki.