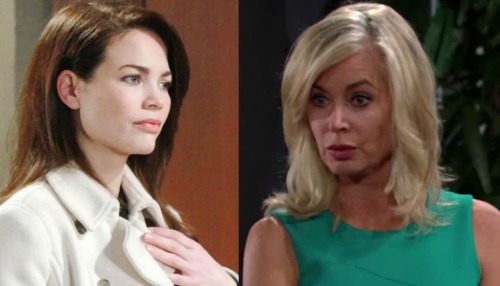 General Hospital (GH) spoilers reveal that more casting shakeups are hitting the soap world. News about one daytime drama can often affect another. When a soap star becomes available, it makes it easy for GH to snatch him or her up for a new part.

Could a soap swap be in the works soon? It’s possible thanks to a big Young and the Restless announcement. Eileen Davidson is leaving her role as Y&R’s Ashley Abbott. Daytime Confidential reports that Davidson wants to spend some extra time with her family.

However, that could actually work to General Hospital’s advantage. Nobody said this soap swap had to be permanent. Perhaps GH could cook up something short-term for Davidson. She might be interested in playing a brand-new role for a few weeks or even continuing on a recurring basis.

General Hospital recently hired Elizabeth Hendrickson (ex-Chloe Mitchell on Y&R) to play Margaux Dawson. Of course, Billy Miller (Drew Cain) is also a Y&R alum. He had plenty of fans as Billy Abbott on The Young and the Restless, but he ultimately traded Genoa City for Port Charles. Maybe it’s Davidson’s turn to make that soap jump as well.

If you’re thinking Davidson might return as Days of Our Lives’ Kristen DiMera, that may be out of the question right now. Stacy Haiduk was recast in the role and it seems she’s still filming her latest stint. That’s more good news for GH. They may not have to compete for Davidson’s attention.

It’s worth mentioning that Davidson was featured on The Bold and the Beautiful in 2007-2008. Since she’s been on Days, Y&R and B&B, she might as well add GH to the list. It’s the last remaining soap to conquer!

As luck would have it, the perfect role’s waiting for Davidson in PC. Franco Baldwin’s (Roger Howarth) desperate to bring Elizabeth Webber’s (Rebecca Herbst) family to town. General Hospital spoilers say they have an autumn wedding coming up, so Franco wants Liz’s relatives to attend.

Could Davidson play Liz’s mother? She’d be a great fit for this long-awaited character. GH fans have been begging the show to bring on Liz’s mom, so now’s the time to make it happen. We’ll give you updates as other GH details emerge. Stay tuned to the ABC soap and don’t forget to check CDL often for the latest General Hospital spoilers, updates and news.