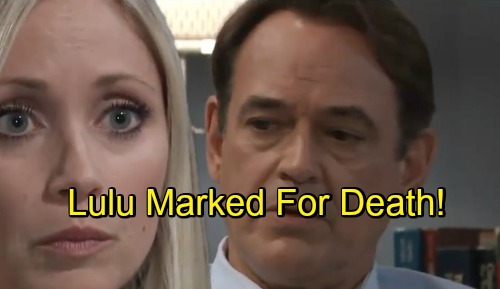 General Hospital (GH) spoilers reveal that Lulu (Emme Rylan) doesn’t know it yet, but she’s clearly in over her head. She wasn’t thrilled when Peter (Wes Ramsey) put her on the Ryan Chamberlain (Jon Lindstrom) story, but she ultimately decided to tackle the challenge. Lulu would rather take the lead on this than let some other writer at The Invader screw it up.

However, Lulu’s latest efforts could put her in danger. She already unknowingly met with the subject of the story! “Kevin” surprised Lulu with his enthusiasm for the work she’s doing. He argued that Ryan was a complex man who deserved complex coverage. Ryan’s eager to have his crime spree splashed across the news all over again. He could actually do that in more ways than one.

In addition to Lulu’s story, Ryan intends to wreak more havoc. He had plenty of time to think at Ferncliff. Unfortunately, Ryan’s soul-searching wasn’t the good kind. He only realized that he enjoys his violent tendencies and doesn’t want to change.

General Hospital spoilers suggest there’s no chance of Ryan turning from the dark side. That’s perfect for GH fans, who are anxious to see some chaos unfold. Who will Ryan’s next victim be? Who could he target and why? Lulu herself might actually be a decent option. After all, she’ll be digging for all the dirty details of the past.

Ryan may see Lulu as someone who’s both curious and disgusted by his actions. That’s an appealing mix for him. Ryan likes the idea of pulling off impressive plots while inciting fear. He wants his crime sprees to be viewed as spectacularly diabolical.

Plus, this will give Lulu something to do without Dante (Dominic Zamprogna) around. If someone like Chase (Josh Swickard) comes to her rescue, it could even create a new romantic path moving forward. Lulu can’t stay stuck in limbo forever.

As Ryan tries to handle Laura’s (Genie Francis) suspicions, he may push the envelope by messing with her daughter. By the time Laura realizes Lulu’s at risk, it could be too late. Lulu could find herself in a very perilous situation. General Hospital spoilers say Lulu could become Ryan’s next obsession, so that can only lead to trouble.

Are you ready to see Ryan’s wrath unleashed? What about poor Kevin (Jon Lindstrom)? Who will get the scoop and save him from his Ferncliff nightmare? We’ll give you updates as other GH details comes in. Stick with the ABC soap and don’t forget to check General Hospital spoilers, updates and news.