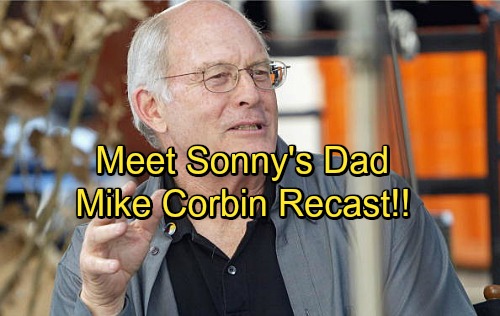 General Hospital (GH) spoilers tease that someone from Sonny’s (Maurice Benard) past is about to shake things up. As all the Faison (Anders Hove) chaos starts to wind down, Sonny will get an unsettling phone call. It looks like that call will jumpstart a different kind of drama for Sonny. Some turmoil is headed his way and it’ll start right in his own family.

GH fans know that Sonny is estranged from his father, Mike Corbin. Ron Hale played the role from 1995 to 2010, but the show has tapped a new actor this time around. TV Line is reporting that Max Gail is taking over as Mike for an exciting arc. Since Hale retired, a recast was necessary for this intriguing storyline.

Gail’s lengthy stint should bring some interesting developments. Viewers will certainly be curious about the reason for Mike’s return to Port Charles. Mike is a gambling addict, so his last exit involved a trip to rehab. Has Mike changed his ways or will he cause more trouble for his son? There’s a good chance it’ll be the latter – at least at first.

General Hospital spoilers say Sonny won’t be too happy about Mike’s comeback. He’ll struggle as deep pain resurfaces. Look for Sonny to battle strong emotions and mull over some difficult memories. The rest of the Corinthos clan will definitely affected by Mike’s next moves.

As for the new actor, you might recognize Gail from his days on Barney Miller. Soap fans may also remember Gail as an eccentric hippie named Merle on Days of Our Lives. Gail recently popped up for guest spots on Scorpion and Hawaii Five-O as well. He’ll undoubtedly fit right in as Mike on GH.

What do you think about the show’s recast choice? Are you looking forward to Mike’s arc? Gail’s run will kick off starting February 5, so stay tuned. We’ll give you updates as other General Hospital news comes in. Stick with the ABC soap and don’t forget to check CDL often for the latest General Hospital spoilers, updates and news.