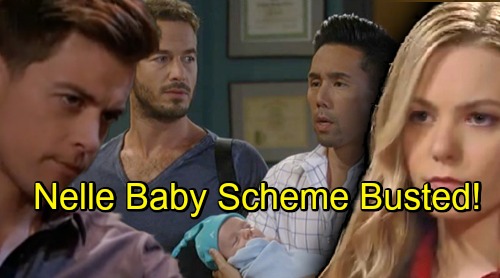 General Hospital (GH) spoilers tease that Nelle’s (Chloe Lanier) prepping for another round of trouble. She recently sent Michael (Chad Duell) a letter, which left Carly (Laura Wright) furious and Brad (Parry Shen) on edge. Nelle had the nerve to offer Michael forgiveness for what he’d done to her. She also suggested she hopes Michael finds comfort in Brad and Lucas’ (Ryan Carnes) new bundle of joy.

Michael requested some alone time after discussing the note with Carly. He repeated Nelle’s comment about the “Brucas” baby and looked pensive. This seems like the first sign of real trouble in Brad’s charade. The birth mother was no big deal thanks to Julian (William deVry), but Nelle could blow up this whole scheme. It’s clear that she’s the real threat to Lucas and Brad’s happiness.

Michael admitted that when it comes to Nelle, he’s better off knowing more and figuring out what she’s up to. That’s why he shut down Brad and Carly when they argued he should trash the letter. Since Michael was so deep in thought, he may realize there was a hidden meaning here.

Michael might determine that Nelle’s got a plot of some sort. He won’t be sure what it is, but he could decide to find out. Nelle enjoys taunting her GH victims, but she usually has a more complex goal in mind. Michael knows exactly how Nelle operates, so he could get the feeling there’s a puzzle to solve.

Of course, the fact that Nelle mentioned Lucas and Brad’s baby is a huge clue. It’s right there and waiting for Michael to use it. General Hospital spoilers say Michael’s suspicions could start to grow. After all, we’ve got all these comments about the baby’s appearance.

Mike argued that the kid had some of Carly’s features. Sonny (Maurice Benard) thought that was just about his dad’s Alzheimer’s, but the statement could come back into play later. Carly also pointed out that “Wiley” was the spitting image of Michael at that age. She brushed it off as all babies looking alike, but that could be a hint for Michael to remember eventually.

Bottom line, Michael now knows there could be a link between Nelle and “Wiley.” It may take some time for him to connect all the dots, but he’s clearly feeling unsettled. Will Michael pay Nelle a visit in Pentonville and grill her? Will he be the one to expose the truth about Jonah and demand his child back?

General Hospital fans won’t want to miss the wild ride ahead! We’ll give you updates as other GH news comes in. Stay tuned to the ABC soap and don’t forget to check CDL often for the latest General Hospital spoilers, updates and news.