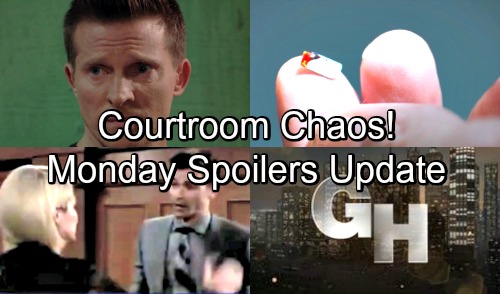 General Hospital (GH) spoilers update for Monday, August 13, tease that Griffin (Matt Cohen) will be forced to derail Kiki’s (Hayley Erin) court case. Scott (Kin Shriner) just asked Griffin if he’d ever had sex with Kiki, so he’s in a tight spot. He’ll hate to blow everything up, but he can’t risk going down for perjury.

It sounds like Griffin will come clean and try to explain, but the damage will be done. Of course, Dr. Bensch (James DePaiva) will nearly cheer from his seat. He’ll be proud of Scott for stepping up, but he won’t think they can relax just yet. Dr. Bensch will push Scott to keep at it and seal the deal on a victory.

Kiki will think one mistake is going to cost her big time. She’ll ask Alexis (Nancy Lee Grahn) if there’s still a chance things will go their way. Alexis will likely admit that the battle just got a lot harder. Now it looks like they were trying to keep Kiki’s sex session with another doctor under wraps. This all could’ve been avoided if Kiki had just told Alexis what happened, but there’s no going back.

Once Griffin and Ava are face to face, a shocking confrontation will go down. Griffin will want Ava to understand the whole situation. He thought they were splitting up, so he was in a vulnerable place along with Kiki. Griffin will insist their sex session was a one-time deal that he deeply regrets.

General Hospital spoilers say Ava will ignore Griffin’s attempts to explain. She’ll give him a soapy slap as she continues to seethe. At the police station, Cameron (William Lipton) will get grilled about his recent theft. He’ll make a comment that leaves Liz (Rebecca Herbst) curious about his potential partner in crime.

However, Cam will promise that he’s the only person to blame. Josslyn (Eden McCoy) had nothing to do with this round of shoplifting, so he won’t want to get her in trouble. Nevertheless, that won’t stop Joss from blaming herself on some level. She’ll tell Oscar (Garren Stitt) that she’s the bad influence, not Cameron.

Oscar’s in for a surprise when Josslyn admits she’s been doing a little stealing herself lately. Secrets and bickering are definitely causing issues for this GH couple. Elsewhere, Jason (Steve Burton) and Robert (Tristan Rogers) will join forces to rescue Anna (Finola Hughes). They’ll visit Finn’s (Michael Easton) last-known location in hopes of getting a few clues.

Jason will challenge Robert to think outside the box. He won’t be certain that Anna was the intended target at all. Robert will consider the idea that Anna’s kidnapping was meant to create some bait. Since Finn’s being blackmailed into helping a mysterious patient, that’s apparently true.

It’s odd that the captors waited a month before they tried to lure Finn, but maybe they have their reasons. Regardless, Anna and Finn are in grave danger. General Hospital spoilers say Anna will disapprove of Finn’s involvement in all this. She’ll worry about him risking his life, but he won’t care as long as she stays safe.

GH fans won’t want to miss Monday’s excitement. We’ll give you updates as other news comes in. Stick with the ABC soap and don’t forget to check CDL often for the latest General Hospital spoilers, updates and news.