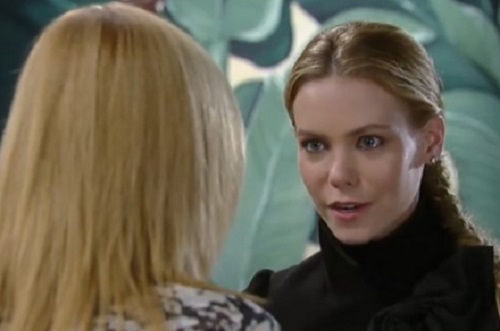 General Hospital (GH) spoilers tease that Nelle’s (Chloe Lanier) plan is destined to hit a huge snag soon. Things have been going marvelously so far, which is exactly why Nelle’s due for some trouble. That’s just soap law! Nelle’s scheme is working like a charm, but it’s only a matter of time until something – or someone – lands in Nelle’s way.

GH has been dropping some serious hints about Nelle’s next obstacle. It certainly looks like it may be Ava (Maura West). From the get-go, Ava has been cautious about Nelle’s plot. She offered support in the beginning, but she never wanted to be in the loop on any details. The less Ava knows, the easier it’ll be to feign total ignorance.

Of course, Ava doesn’t have the same cold heart she used to have. She’s obviously not the best person in town, but she’s not the worst either. Ava’s relationship with Griffin (Matt Cohen) has brought out a softer side, so she tries to help people occasionally.

Despite Ava’s hatred for Carly (Laura Wright), she suggested that maybe Nelle should back off and let this reunion happen naturally. Poor, pathetic Michael (Chad Duell) seems to be falling for Nelle’s innocent act again. He recently asked her to an expectant parents’ party, which can’t be a good sign – at least for him! 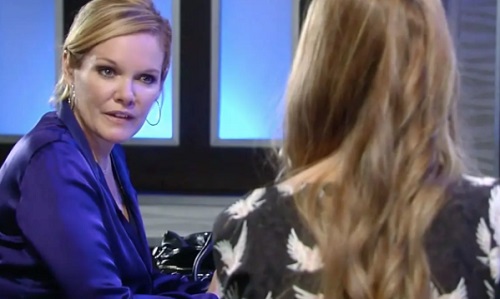 On the other hand, it’s great news for Nelle. She’s already winning Michael over, so it’s a terrible idea to continue gaslighting Carly. Nelle’s only going to sabotage herself when this all blows up. Nevertheless, Nelle just doesn’t know how to quit while she’s ahead. General Hospital spoilers say Nelle’s plan will sink to a new low and a crucial mistake just might lead to exposure.

Fortunately, it seems Carly will remain in the dark for now. Perhaps Ava will be the one who discovers Nelle’s despicable Morgan (Bryan Craig) “hauntings.” Ava played a role in Morgan’s demise, but she still cared about him. She’ll undoubtedly hate the idea of Nelle using Morgan’s memory to torment his grieving mother. Ava loathes Carly, but this is absolutely appalling!

However, Nelle could remind Ava of the latest fiasco with Avery (Ava and Grace Scarola). She may suggest that she’s trying to protect her own child from similar ordeals. Nelle wants to make sure she remains part of her baby’s life, too. She may get Ava to admit that they’d both to anything to keep their kids.

Ava may be torn about revealing Nelle’s scheme. She could see Nelle’s point on some level, but her newfound conscience may not let her stay quiet. That’s when Nelle could pull out the big guns. She could insist that Ava’s left her no choice.

General Hospital fans saw Nelle look at the test results pic on Ava’s phone. Griffin (Matt Cohen) would be furious if he knew Ava betrayed his trust and snapped a photo. Nelle sent herself a copy and it could come in handy down the road. She may vow to show it to Griffin and tell him all about Ava’s actions. If Ava doesn’t cooperate, Nelle could keep that promise.

Perhaps GH viewers could see a secret stalemate. Will Ava stay tight-lipped if Nelle does the same? We’ll give you updates as other details emerge. Stick with the ABC soap and don’t forget to check CDL often for the latest General Hospital spoilers, updates and news.